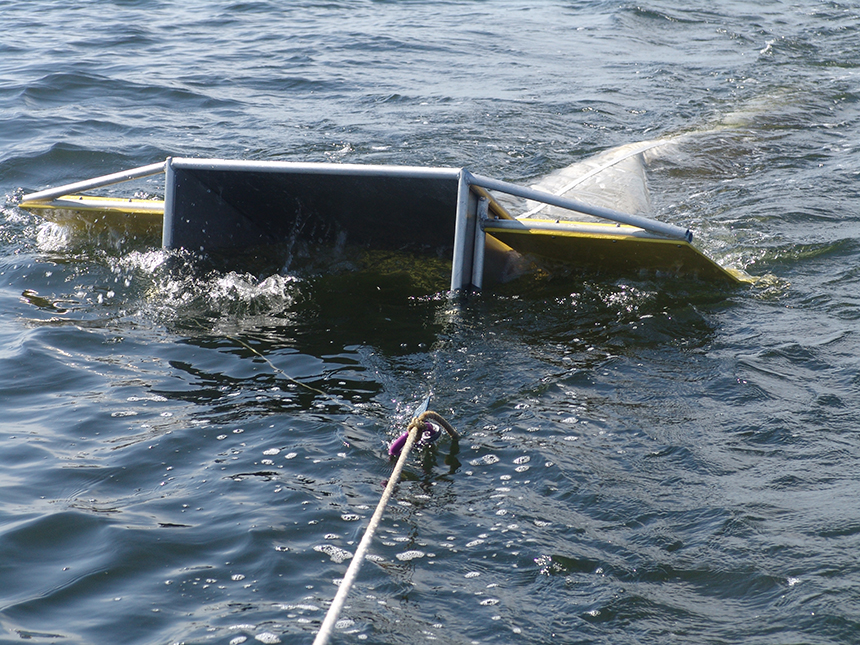 A manta trawl, so named because it resembles a manta ray, is a net system for sampling the surface of the ocean. It’s useful for collecting plastic pieces, both large and small. (Frank Carini/ecoRI News photos)

Save The Bay trawls collect unexpected amounts of microplastics

NARRAGANSETT BAY — As the manta slowly trawled closely behind the 25-foot Save The Bay boat, a plastic sandwich bag, a cigarette lighter, a piece of ballon, and a blue bottle cap all floated by the port side.

Twenty minutes later, the manta was hauled back into the boat. It took about half an hour of close inspection with tweezers to dislodge the inorganic from the organic. Crabs in their planktonic stage covered sieves and hands. Juvenile fish, eelgrass, sea lettuce, and other signs of life were released back into the 74-degree water. The remaining tiny bits of plastic were dropped into a mason jar filled with rubbing alcohol and labeled “Trawl 22, Conimicut Point.”

Save The Bay is playing a leading role in establishing baseline data on the amount of microplastics — small pieces of plastic less than 5 millimeters long — within the Narragansett Bay watershed. The goal is to highlight this growing problem and draw attention to regional efforts to eliminate single-use plastics, such as bags, cups, and straws.

The Great Pacific Garbage Patch, halfway between California and Hawaii, is the largest of the five offshore plastic accumulation zones, commonly referred to as gyres, in the world’s oceans. The North Atlantic Gyre is the closest to southern New England.

It has been estimated that some 2 million tons of plastic enter the world’s five oceans annually. More than half of this plastic stays at the surface as it continues to make its way further offshore, where it’s carried by currents to one of the five gyres. Once these plastics enter an accumulation zone, they are unlikely to leave the area until they degrade into smaller microplastics.

Save The Bay is finding that the Narragansett Bay watershed — or, more aptly, the humans who live and play within it — is contributing significantly to the plastic collecting in the world’s oceans. 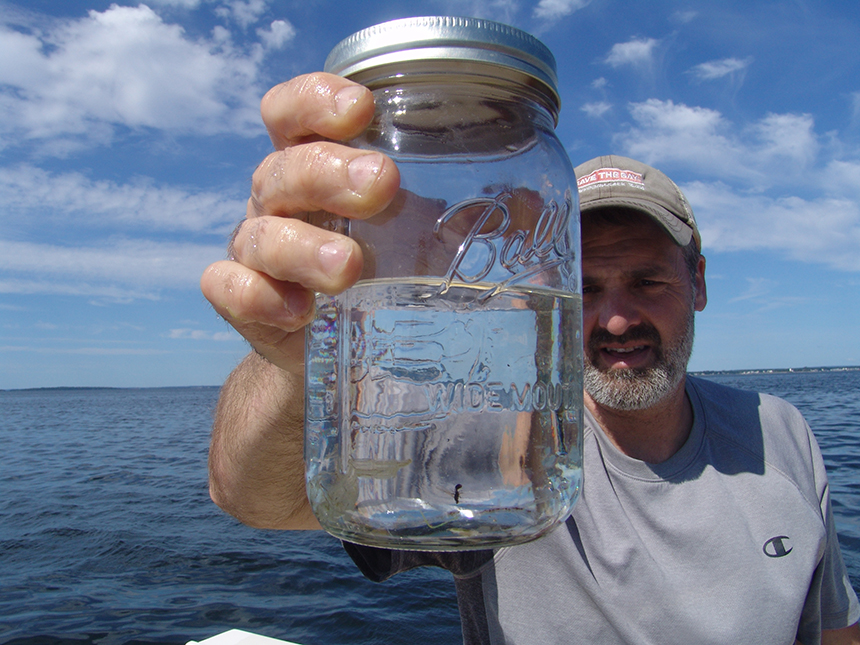 David Prescott, Save The Bay’s South County coast keeper, holds up a mason jar containing 28 bits of plastic collected from upper Narragansett Bay during one 20-minute trawl. The pieces are not easy to see, and that’s the problem. The only thing easy to see is an unlucky ant.

The three Save The Bay staffers conducting the trawls have been surprised by how much plastic they have found in local waters. When they started, they expected some microplastic trawls would come up empty. They’re still waiting for that to happen. The crew has done some two dozen surface trawls, and every one has produced plastic bits, from nurdles, the raw building blocks for plastic bottles, bags, and straws, to microbeads — basically, the tiny pieces of plastic few people are picking up at beach cleanups.

“I was surprised by how much plastic we found,” said Kate McPherson, Save The Bay’s river keeper. “It wasn’t what I expected when we started. We need to stop buying cases of twelve-ounce water bottles.”

McPherson noted that Wenley Ferguson, Save The Bay’s director of habitat restoration, is finding microplastics during her work in salt marshes.

The first 20-minute trawl labeled “Trawl 21, Barrington Beach Crescent” collected 28 microplastic pieces. This shore-hugging trawl was conducted in “pristine water” along a coast dotted with expensive homes. The second trawl collected another 48 plastic fragments. Many of these bits of pink, purple, orange, blue, white, and yellow were no bigger than a sesame seed. There were pieces of what looked like straws, duct tape, and blue strands from those popular tarps used to cover such things as woodpiles. Fishing line and colorful microfibers from synthetic clothing and from polar fleeces made of recycled plastic were also picked from around juvenile quahogs, northern pipefish, puffers, and an Atlantic silverside.

“This is what we’re seeing everywhere we trawl,” Prescott said. “Microplastics are everywhere — in bottled water, in water supplies. We really need to reduce our use of single-use plastics. This project is showing the extent of the problem.” 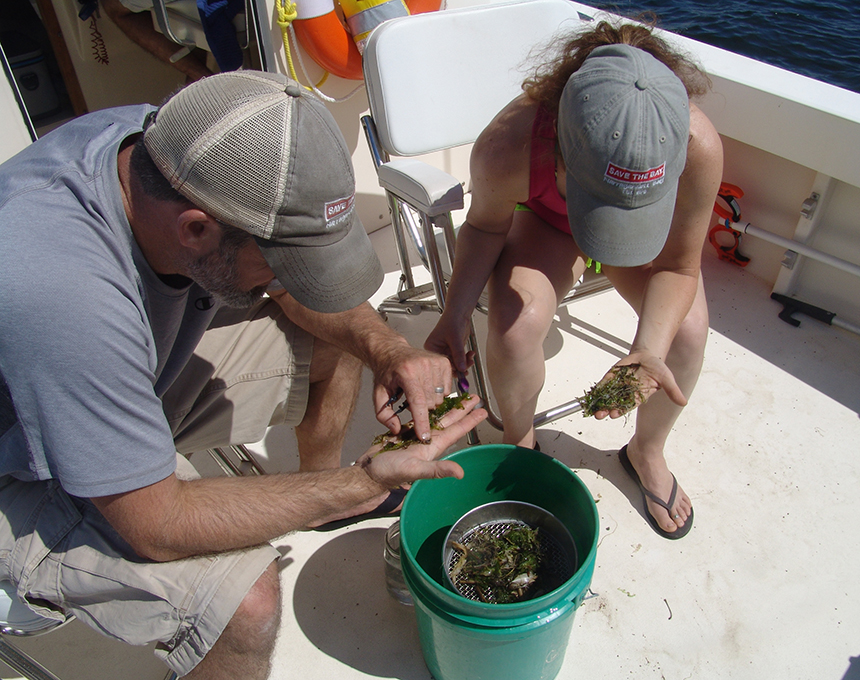 David Prescott and Kate McPherson carefully comb through a trawl looking for microplastics.

Omnipresent plastic trash litters the Ocean State’s shoreline and beaches and floats down rivers and streams that drain into Narragansett Bay, creating hazards for birds, fish, and other sea life.

Marine animals can easily mistake tiny plastic pieces for food. For instance, a piece of plastic film leftover from opening a pack of cigarettes looks a lot like a piece of eelgrass.

Prescott noted that plastics this small can be easily confused with plankton and easily swallowed by marine organisms and fish. Jarbeau said he routinely sees plastic bags blowing from osprey nests, which the birds use along with natural materials when nest-building.

“We need to start making better decisions,” Jarbeau said. “We need to be conscious of what we’re doing.”

The toxins that adhere themselves to floating pieces of plastic make these petroleum-based bits even more dangerous, as these poisons and plastics move their way up the food web to humans.

Since microplastics are too small to be seen on the water, Save The Bay applied for and received funding through the Taunton River Stewardship Council to buy a manta trawl. The net’s tiny 0.33-millimeter mesh allows the system to collect the smallest of specimens.

The three-person Save The Bay team has conducted trawls on Mount Hope Bay, Greenwich Bay, Little Narragansett Bay, and Newport Harbor. They began their data collecting on the Taunton River three summers ago, because the Massachusetts cities of Taunton and Fall River have a combined 20 stormwater outfalls that dump plastics of all shapes and sizes into a river that feeds into Narragansett Bay.

The trio sampled five locations, starting at the Taunton Yacht Club in the north and ending near Battleship Cove. They found microplastics up and down the Taunton River.

Trawls at Battleship Cove and in Newport Harbor have collected the most plastic, including some larger pieces of Styrofoam and candy wrappers. The crew said both trawls were “pretty disgusting.”

Save The Bay is sharing this information with students, educators, lawmakers, and public officials to help generate more discussion about the dangers of overusing plastics and the role humans must play in keeping local waters healthy.

5 Reasons Why Businesses Are Going Green With Solar Panel Installations

Labor’s climate policy is too little, too late. We must run...