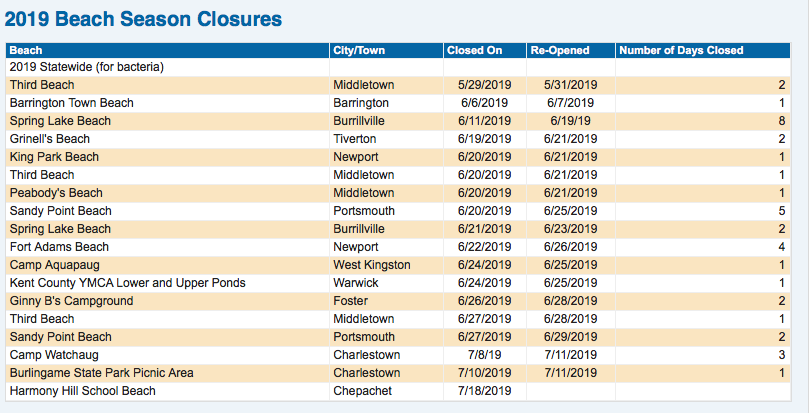 Rhode Island beaches were closed for a total of 142 day in 2018 because of high levels of contamination. So far this yer, there have been 39 beach closure days. (Rhode Island Department of Health)

A little-known beach at a private school in Chepachet has been closed by the Rhode Island Department of Health (DOH) since July 18 because of unsafe levels of bacteria. And two beaches on ponds used by the Kent County YMCA in Warwick were also recently closed because of bacteria contamination. Overall, however, Ocean State beach closures are in decline this summer after two years of higher numbers.

At the midway point of summer 2019, 19 beach closure announcements, or events, have resulted in 39 days of restricted access to fresh and saltwater beaches in Rhode Island. In 2018, 37 closures events led to 142 days of closures. In 2017, 35 events led to 101 days of closed beaches. Easton’s Beach in Newport and Oakland Beach in Warwick are two popular beaches with historical trends of increased bacteria levels.

Testing for the bacteria enterocci occurs from Memorial Day though Labor Day at 40 freshwater beaches and some 70 saltwater beaches. Enterocci bacteria is found in fecal waste from humans and animals. Although not harmful to humans by itself, the bacteria indicates the possible presence of other harmful viruses, protozoa, and bacteria, such as fecal coliform.

Enterocci reaches swimming areas from wastewater treatment facilities, leaking septic systems, cesspools, stormwater runoff, and sewage discharged from boats. Waste from pets and wildlife such as geese are common sources. The improper application of manure used in farming and lawn care can also cause contamination.

Lower and Upper Ponds used by the Kent County YMCA were closed for a second time this year on July 22.

The source of the bacteria is unknown at the Harmony Hill School, a day and boarding school for students with learning challenges. The 150-acre campus includes a waterfront swim area on a pond. DOH announced the beach’s closure on July 18.

Although the beach isn’t open to the public, the school is required to conduct water testing every three weeks and report the results to DOH. Federal funding for the state beach testing program only covers saltwater beaches. Freshwater beaches, public or private, that serve 15 or more people are required to pay for their own testing.

The number and frequency of beach closures is typically tied to rain events. But even with a high volume of precipitation this spring and early summer, beach closures are off the pace of the past two years. 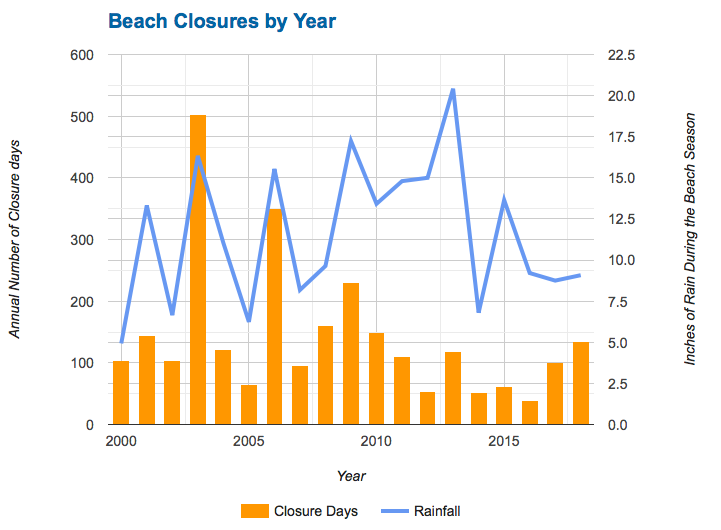 According to the National Oceanic and Atmospheric Administration’s Northeast River Forecast Center, the coastal parts of Rhode Island have received up to 2 inches of rainfall above the normal amount during the past 60 days. July, however, has been an average month for rainfall across the state and regional watersheds.

On Allens Avenue in Providence, the facility handles effluent from 10 municipalities by holding excess stormwater in massive underground tunnels. Rather than flow directly into upper Narragansett Bay, the stormwater from large rain events is stored and treated before discharge. In addition to the opening of long-closed shellfishing areas, the beaches along Narragansett Bay are cleaner and less prone to contaminants delivered via stormwater runoff.

Other initiatives may be helping, Poucher noted, such as efforts to keep geese from congregating on beaches such as Bristol Town Beach. Mandated sewer connections at homes with cesspools are also likely reducing beach contamination. In 2015, state legislation was passed to ban the state’s remaining cesspools, many of them in dense coastal communities such as Warwick. Oakland Beach was closed for nine days in 2016 and 26 days in 2017, but dropped to six closed days in 2018 and none so far this year.

5 Reasons Why Businesses Are Going Green With Solar Panel Installations