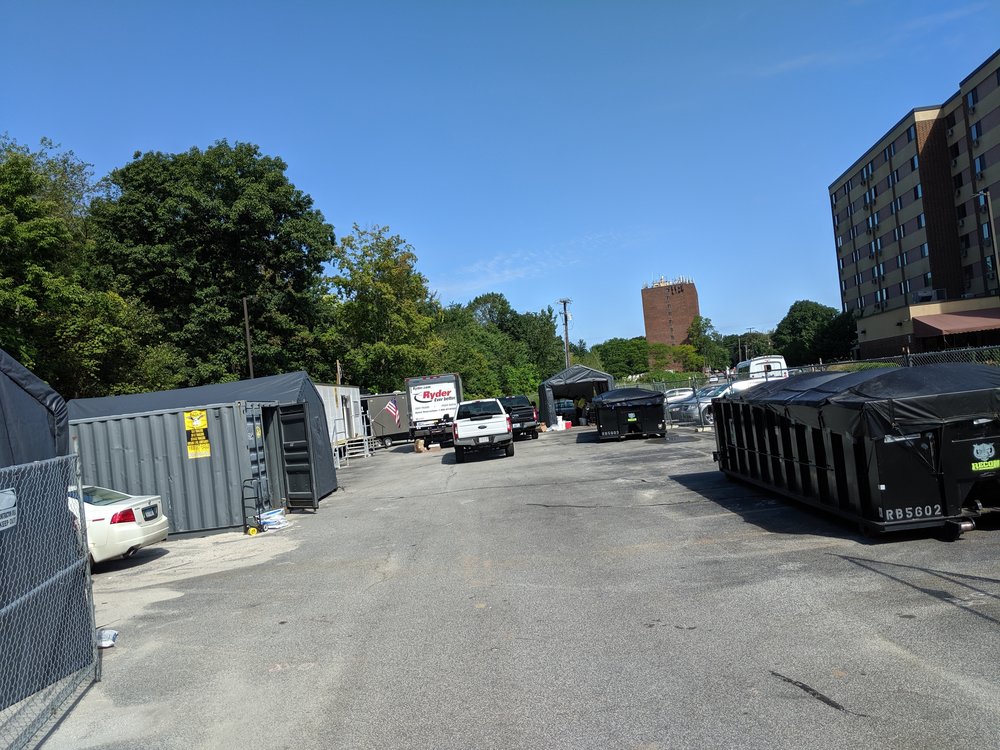 Acres of parking lot will be removed and capped to contain contaminated soil outside Centredale Manor and Brook Village Apartments in North Providence, near the Johnston line. (Tim Faulkner/ecoRI News)

NORTH PROVIDENCE, R.I. — The new director of the New England office of the Environmental Protection Agency (EPA) announced the latest and perhaps final phase of the cleanup of one of Rhode Island’s most polluted properties.

Before joining the EPA on Aug, 22, Dennis Deziel worked as a top lobbyist for Dow Inc., the chemical giant with a woeful environmental record. The company has a decades-long history of infamous pollution and public health scandals such as Agent Orange, Union Carbide, and defective breast implants. After dioxin contamination occurred at its chemical manufacturing plant in Midland, Mich., Dow concealed documents from government officials. The company was allowed to edit an EPA report about the company’s pollution.

In 2013, Dow was ordered to pay $1.2 billion for the company’s involvement in a scheme to fix the price for urethane, the chemical used to make foam for furniture, packaging, and vehicles.

Deziel began work as EPA’s Region 1 administrator after five years at Dow as its director of federal government affairs. He visited the Centredale Manor Superfund site on Sept. 9 to formally announce a settlement with the owners of the contaminated site who are paying $42 million toward a $100 million cleanup. The work involves a 1.5-mile stretch of wetlands and commercial and residential property along the Woonasquatucket River. The cleanup includes potentially draining Allendale and Lyman Mill ponds to excavate some 156,000 cubic tons of contaminated sediment and removing and capping about 9 acres of parking lot. Contaminated soil will be sent to the state landfill or to a designated hazardous waste facility.

It’s been a long recovery for Centredale Manor. Between 1943 and the 1970s, the site went through a number of industrial uses. The chemical maker Metro-Atlantic and the incinerator-based drum recycler New England Container released toxins and dumped dioxins into the soil and river. Harmful waste was buried onsite. Pollution from the facilities contaminated surface water, the water table, the watershed area, and water that flows along the Woonasqutucket River to Providence.

Mayor Charles Lombardi recalled responding to a fire at the site as a volunteer firefighter in the late ’70s or early ’80s and seeing steel drums launched into the air by exploding chemicals.

“God knows what was happening prior to that and what was being let out into the river here,” Lombardi said.

In 1996, decades after the pollution started and after elderly and low-income housing had been built on top of the contaminated land, the EPA began to investigate. To reduce the health threat to the residents living near and at the site, the first small-scale cleanup took place in 1998. In 2000, the site was designated a federal Superfund site.

A similar clean-up project was announced in 2011, but the owners Emhart Industries Inc. and Black & Decker Inc. and the EPA contested the settlement for the cleanup. In an agreement reached in July 2018, Emhart and Black & Decker agreed to pay the $42 million already spent on the cleanup and to hire contractors to remediate the site, with oversight by EPA and the Rhode Island Department of Environmental Management.

The cleanup is expected to take five to six years. A fence around the ponds has restricted public access for decades. A goal of the cleanup is to reopen the water to fishing and swimming.

When asked how his experience at Dow helps him with cleanups such as the Centredale site, Deziel said it “is just another part of understanding how the government works. How it functions in Washington and doesn’t function in Washington. It gives me context for how we work and the best paths forward.”

Regarding the EPA’s deregulation of methane and auto emissions and removing restrictions on harmful chemicals and pesticides, Deziel said he can’t speak to what is happening in Washington, D.C.

“The regional job shouldn’t be political,” he said. “It’s about protecting the environment and the communities.”

As a New Hampshire native, Deziel said the job is “to give back and give some public service.”

Deziel said he couldn’t yet say if addressing the climate crisis is a priority. “This is my first week. I’m still getting right on those issues.”

What If Everyone Used Solar Power Energy at Home?

Reassessing Worksite Wellness After All These Years: Still Medical or Blossoming...