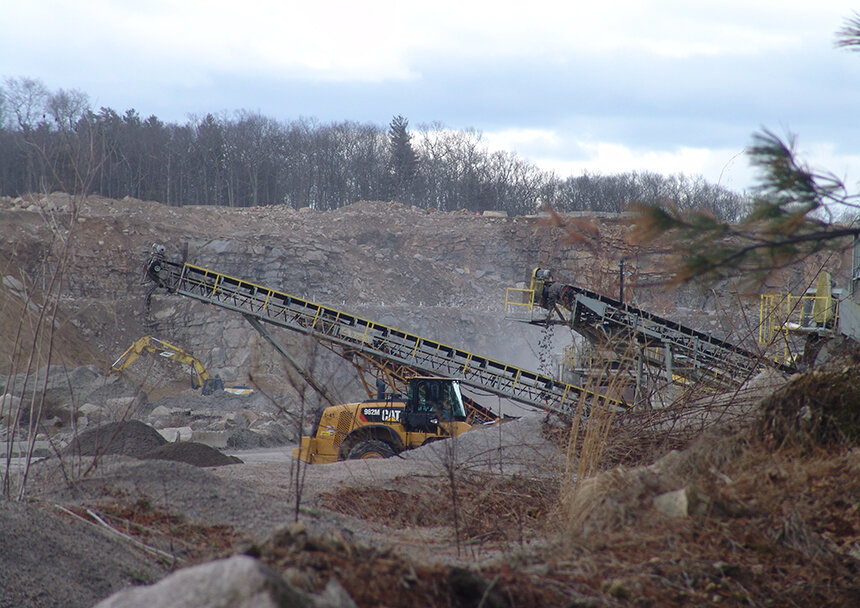 Hopkins Hill Sand & Stone, which blasts and mines next to the Big River Management Area, has been operating illegally since fall 2004. (Frank Carini/ecoRI News photos)

Nearly two years ago ecoRI News unintentionally filed a runoff complaint against the Cardi Corp. subsidiary with the Rhode Island Department of Environmental Management (DEM). During a hike on April 17, 2018 with a concerned Rhode Island resident, Cliff Vanover, plenty of evidence of runoff damage was observed in the 8,319-acre South County conservation area, including accumulating silt on rocks and stream beds and out-of-place gravel and stones that could only be classified as washed-away quarry debris.

When ecoRI News asked DEM for comment about the situation, the state agency responded by logging our media inquiry as a complaint and saying it would conduct an inspection of the site. It did, on May 4, 2018, and found that Hopkins Hill Sand & Stone “is currently discharging stormwater associated with industrial activity and process water associated with sand and gravel washing operations.”

Some 20 months later DEM is still investigating, even though the state has long known the business is illegally discharging waste runoff.

Gail Mastrati, assistant to the director, recently told ecoRI News that the investigation is still ongoing. When asked when the investigation is expected to be finished, she wrote in a Jan. 10 email that, “Every investigation is different and therefore we do not have a timetable, but will be happy to keep you updated on any developments. I hope this is helpful.”

On Dec. 17 of last year, Vanover received an email from a DEM technical staff assistant noting that the “case is still under investigation.”

Even though DEM has said it hasn’t received any runoff complaints concerning Hopkins Hill Sand & Stone — Vanover told ecoRI News he filed two complaints two years ago and initially complained about the matter in 2003 — the state agency knows the quarry has been operating without a Rhode Island pollutant discharge elimination system (RIPDES) permit since fall 2004.

A June 14, 2018 letter of noncompliance sent to Hopkins Hill Sand & Stone by DEM noting that the company is in violation of the federal Clean Water Act and state law also makes reference to another letter sent nearly 14 years earlier (Oct. 13, 2004) that notified Hopkins Hill Road LLC that it needed “to apply for and receive approval from the DEM RIPDES program for the permitting of stormwater discharges associated with industrial activity.”

A subsequent DEM letter sent about a month later extended the company’s RIPDES application deadline to Aug. 27, 2018. A letter dated Oct. 26, 2018 was written in response to Hopkins Hill Sand & Stone’s RIPDES application. The letter noted five deficiencies that need to be corrected before the application can be considered. It also noted that “any discharges from this site are unpermitted and subject to appropriate enforcement.”

“No response to the deficiency letter has been received and no permit has been issued,” she wrote. 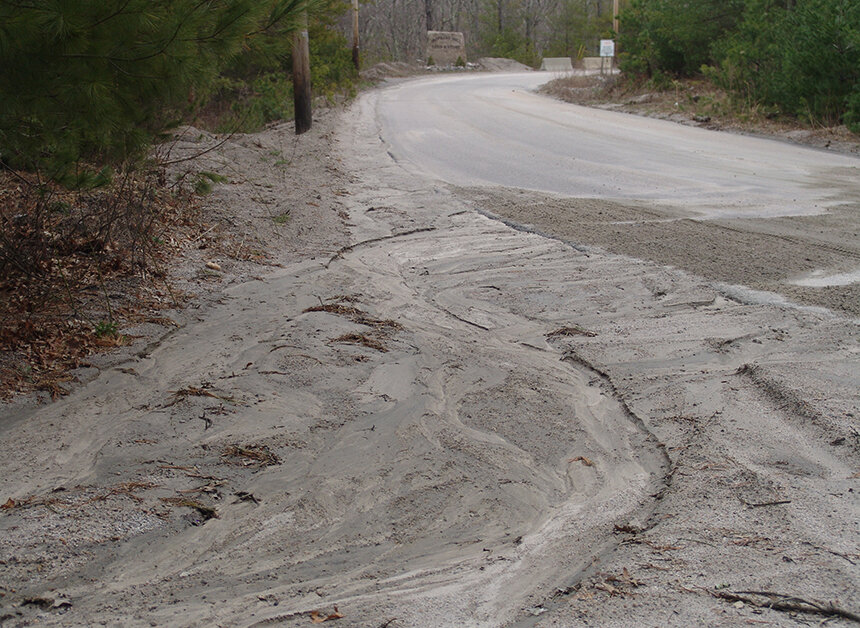 Quarry waste from the business has found its way into the popular conservation area it borders.

The main objective for any activity that is allowed on the Big River Management Area is the protection of drinking-water quality, according to a 1996 land-use study of the conservation area. The study also noted that land use shouldn’t adversely impact water quality and must consider the impact a use has on the environment and proper maintenance of plant and animal habitat.

The Big River Management Area, which is owned by the Rhode Island Water Resources Board and managed by DEM, features several ponds and rivers, many streams, and important freshwater wetlands.

During that hike with Vanover two springs ago, along one side of a paved road to the mining operation — the side nearest the DEM-managed property and depicted in the above photo — was a small desert of quarry sand. A noticeable path of this blasted and crushed debris stretched into the woods. Further into the woods, fencing installed by Hopkins Hill Sand & Stone to stop runoff from its quarry washing into the Big River Management Area was buried under rocks and silt.

Insects Do It in the Dark: Glaring Problem of Light Pollution Has Simple Solutions

Rising sea levels: The Haakse Dike – an escape route for...