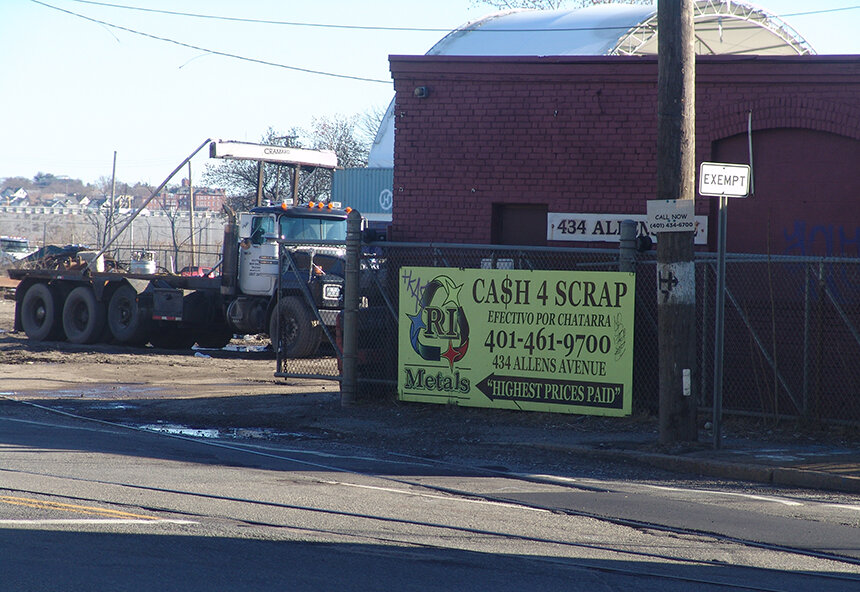 Rhode Island Recycled Metals, at 434 Allens Ave. in Providence, has been operating without required permits and a stormwater management plan since 2009. It has since opened another facility down the street without state approval. (Frank Carini/ecoRI News)

PROVIDENCE — The cleanup goes on at a controversial waterfront scrap yard on Allens Avenue.

Although Rhode Island Recycled Metals (RIRM), 434 Allens Ave., began polluting in 2009 when it opened without permits, it wasn’t until 2015 that the state took legal action against the company.

Since then, the cleanup has moved at a glacial pace. Within the past year, the Cold War-era Soviet submarine, Juliette, has been dragged partially ashore to continue dismantling the steel. Other vessels have been anchored or stuck for years as they await recycling. A tugboat is still fully submerged, a ferry is partially submerged, and a derelict barge has been relocated along the waterfront to another recycling facility on Allens Avenue.

Stormwater runoff controls are absent, as pollution from the capped 6-acre brownfield flows into the Providence River, according to Save The Bay.

In the most recent court order, RIRM was given another 90 days to comply with a new consent order for removing the vessels. Since the original complaint was filed by the Rhode Island Department of Environmental Management (DEM) on March 4, 2015, more than 70 hearings, reports, and conferences have been held in Rhode Island Superior Court. The waterfront business has so far paid a $25,000 penalty, but a portion of that penalty is still outstanding. RIRM also hasn’t performed a supplemental environmental project.

Several of Rhode Island Recycled Metals’ vessels are sunk or partial submerged in the Providence River. (City of Providence GIS)

The site was contaminated during the 1980s by a computer and electronics shredding company that conducted its operations on bare soil. The property has tested positive for toxins such as polychlorinated biphenyls (PCBs), a carcinogen commonly used in electronics. The site was capped after some of the contaminants were removed. The site sat unused until RIRM opened in 2009.

The current and previous owners never received permits from the city or DEM to operate a scrap yard.

RIRM has been cited by DEM for disturbing the soil cap at the site with trucks and heavy machinery, in addition to releasing pollutants from dismantled vehicles into the soil and Providence River.

About four years ago, RIRM opened an electronic waste collection facility down the street, 278 Allens Ave., without obtaining the required permits or having a stormwater management plan in place.

How To Protect Your Feet & Legs During Work

Renewable Energy As a Viable Alternative – If Not Now, Then...