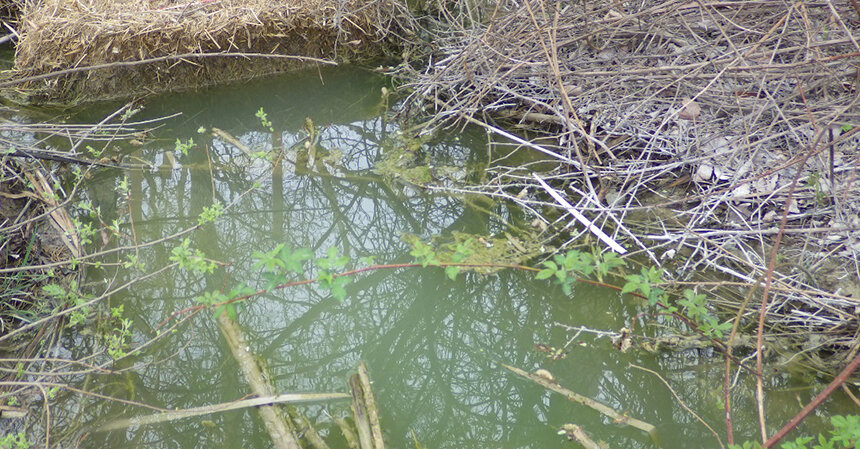 In May 2018 inspectors from the Rhode Island Department of Environmental Management observed turbid water containing silt and sand at the quarry’s culvert discharge area. (DEM)

WEST GREENWICH, R.I. — The Rhode Island Department of Environmental Management (DEM) has issued a notice of violation to Hopkins Hill Sand & Stone LLC and Hopkins Hill Road Realty LLC for environmental violations arising from the mining of sand and stone at a facility on New London Turnpike.

Hopkins Hill Sand & Stone operates the quarry mining and processing facility, and Hopkins Hill Road Realty is the property owner. The site is adjacent to the Big River Management Area, a 8,319-acre conservation area that features streams, wetlands, and the Big, Nooseneck, Congdon, and Carr rivers.

The notice of violation (NOV) charges both parties with violations of Rhode Island’s Water Pollution Control Act and state water quality and pollutant discharge elimination system regulations. The enforcement action includes a $67,896 penalty. It also requires the parties to immediately cease the discharge of all process water and stormwater from the facility to nearby wetlands until a permit has been issued and all the required controls have been installed and are operational.

“This action is another step in DEM’s efforts to hold parties responsible for their acts,” said Terrence Gray, DEM’s deputy director for environmental protection. “Right in the middle of the Big River Management Area, the quarry operator and the property owner failed to comply with DEM’s requirements by discharging process water and stormwater into the state’s wetlands, thereby altering the wetlands without a permit. And, they continue to do so in flagrant disregard of state laws and regulations designed to protect these important natural resources. It’s imperative that they follow the measures required by our enforcement action and come back into compliance as soon as possible.”

A June 14, 2018 letter of noncompliance sent to Hopkins Hill Sand & Stone by DEM noting that the company is in violation of the federal Clean Water Act and state law also makes reference to another letter sent nearly 14 years earlier (Oct. 13, 2004) that notified Hopkins Hill Road LLC that it needed “to apply for and receive approval from the DEM RIPDES program for the permitting of stormwater discharges associated with industrial activity.”

The NOV orders the parties to submit to DEM within 90 days a plan assessing the impacts of sedimentation to the wetlands. The plan must describe the methods that will be used to estimate the extent of the deposition of non-native soil, including depth, type, and area impacted and include a schedule for completion of the work.

If any violation continues, each day during which the violation occurs will constitute a separate offense and the penalties will continue to accrue, according to DEM.

In 2004, Hopkins Hill Sand & Stone applied to DEM to alter wetlands for the proposed mining of sand and stone. DEM approved the wetland application with the condition that the operation apply for a separate approval from DEM to discharge stormwater associated with industrial activity.

While conducting compliance inspections of the quarry in May 2018, DEM observed turbid water containing silt and sediment being discharged toward wetlands. In June, DEM issued the letter of noncompliance. In July, DEM was notified by the facility’s engineering consultant that the V-notch weir for the main settling basin was plugged and that it would be repaired to prevent future discharge.

In August 2018, Hopkins Hill Sand & Stone applied for a permit from DEM to discharge process water and stormwater from the facility to the wetlands. DEM identified several deficiencies in the application and issued a deficiency letter two months later.

The letter stated that the deficiencies had to be corrected for DEM to proceed with the application review. In March 2019, DEM was notified by the company’s consultant that it was working with its client to meet the testing requirements and that additional information would soon be submitted.

To date, DEM said it has received no further communication from Hopkins Hill Sand & Stone or its consultant.

Main Benefits of Allowing Your Employees To Undergo Health And Safety...

25 Things That You Can Do Today to Start Living "Green"