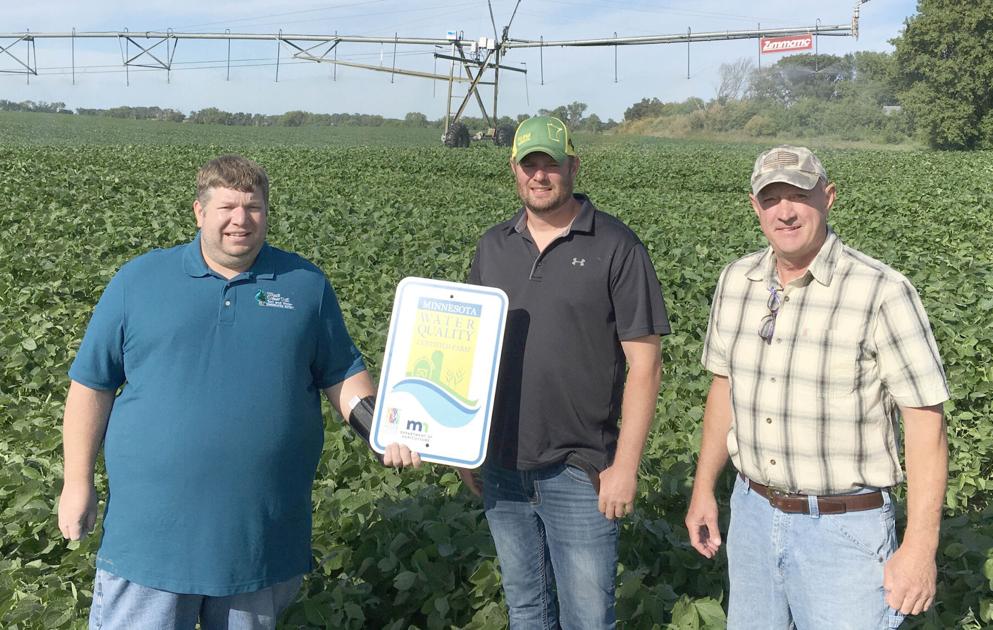 Jeremy Fronning of rural Dalton joins the ranks of Otter Tail County farm producers who have been recognized as being certified through the MN Agricultural Water Quality Certification Program (MAWQCP).  To become certified, property owners must meet program qualifications through a comprehensive assessment process.  The assessment evaluates soil types, topography, nutrient and pest management practices, tillage, irrigation, drainage management and presence of and/or need for conservation practices.  The MAWQCP seeks to recognize producers who are operating with a keen awareness of protecting and enhancing water quality.

Jeremy, spouse Maggie and their young children Cecelia and Clay, grow corn and soybeans east of Dalton.  Jeremy has worked steadily to manage crop residue to leave a minimum of 30% cover after planting the new crop each year.  That 30% cover is a difficult level to achieve when establishing a new crop into soybean stubble left from the year before.  Jeremy is addressing this challenge by using vertical tillage equipment which minimizes soil disturbance but also works the soil enough to allow for a timely warmup in the spring ahead of planting.  He has also incorporated the use of cover crops into his operation, using cereal rye.  He has used other cover crop species, but he keeps going back to rye due in part to how well it establishes and survives but also for its ability to handle herbicides applied to the crop into which the rye is seeded.  Jeremy’s use of cover crops has in some cases gotten the neighborhood talking!  One of his fields is directly adjacent to the Quam Lutheran Church, where several years ago, some of the parishioners had a conversation questioning if Jeremy had rented out the ground due to the “weedy” appearance which was so unlike how it had looked in the past.  In reality, Jeremy had seeded rye into the previous corn crop and had then planted soybeans into the corn residue and rye cover crop with minimal tillage.  Jeremy noted that this field provided the best soybean yields he had that year due mostly to the lack of disease in the field!  Jeremy summed up this experience noting that using cover crops and leaving residue on the soil surface creates some initial anxiety but what comes out of the combine at the end of the year helps confirm his decision.

Jeremy has several tracts of cropland that are irrigated.  As part of his MAWQCP certification, he agreed to contract with the East Otter Tail SWCD to obtain irrigation water management assistance beginning in the 2020 crop year.  Jeremy noted, “Why apply water when you don’t have to?”  He also added that pumping water is expensive, if the irrigation water management service can help him better schedule irrigation events, he will undoubtedly save money.  The irrigation systems also allow Jeremy to spoon-feed the corn crop by adding 28% nitrogen to the irrigation water and make those applications several times during the growing season thereby improving utilization by the corn crop.  In addition, the smaller timely applications of nitrogen dramatically reduce potential nitrogen losses to the environment.  Nitrogen and phosphorous fertilizer programs in the operation follow the U of M recommendations and variable rate applications help improve fertilizer efficiency.

Jeremy shared that the reason for his pursuit of certification through the MAWQCP was seated in his desire to preserve the land for future generations and to learn more from others. His belief in the ability for farmers to utilize government programs to help strengthen and preserve the land while also benefitting wildlife and environment is a great tool.  He added that, “Not everything is about me, I need to look beyond the present to see how what I do will impact others now and in the future.”

How To Do Your Part ━ TPG, Inc.

Concrete, a Centuries-Old Material, Gets a New Recipe