Railroad tracks hang suspended above floodwaters after a levee breaks along Highway 37 near Novato in February 2019.

Railroad tracks hang suspended above floodwaters after a levee breaks along Highway 37 near Novato in February 2019.

As global warming dials up sea levels and storm surges, the Bay Area will see not only more flooded streets and shorelines, but more traffic, a new study shows, with commuters converging on drier routes and backups rippling sometimes 20 miles or more from the water.

The research, released Wednesday by Stanford University scientists, suggests that some of the region’s biggest traffic delays from flooding will be in Santa Rosa, Napa and Vacaville, all far from where the flooding occurs.

In these areas, with water just a foot higher along San Francisco Bay, as many as half of commuters would face backups of 30 minutes or more within the next 20 years, the study shows. The higher water could result from any combination of long-term sea level rise and periodically strong surf.

The projected delays don’t bode well for a region that’s already socked with congestion. Daily commutes average 30 minutes, and many people drive for much longer to and from work. Shelter-in-place orders during the coronavirus pandemic have provided some relief, but traffic levels already have begun to rebound. 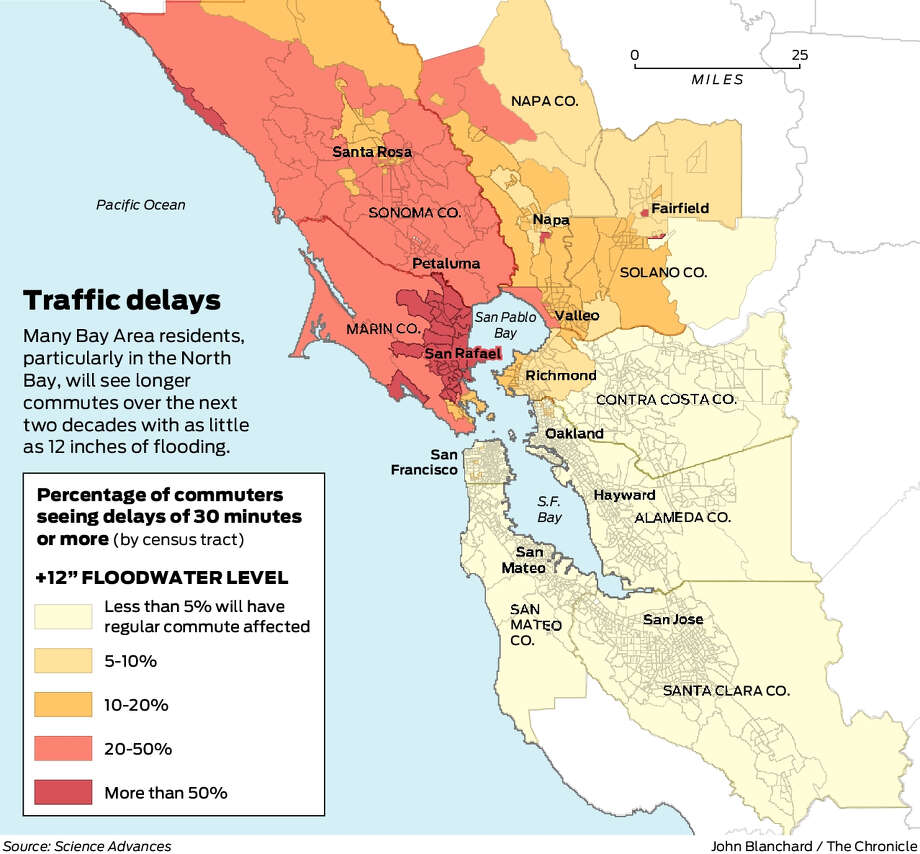 “There’s this common thinking that coastal flooding will only affect residents and businesses in that area,” said Indraneel Kasmalkar, a doctoral student in computational and mathematical engineering at Stanford and lead author of the new traffic study. “But the disruptions are going to propagate.”

These disruptions, the researchers say, are because of the cascading effect of traffic that often makes areas with few major highways more congested, even if they’re far from the trouble spot.

Some of the worst areas for flooding in the Bay Area are San Mateo and Marin counties, as a result of low-lying bay shore. While Marin County will see the region’s worst traffic delays, according to the study, San Mateo County will have minimal problems because drivers there have more alternative routes.

“If you think about it, it’s not really surprising,” Kasmalkar said. “It’s the road network that really is the key.”

With few options outside of Highway 101 in Marin, more than half of drivers in parts of this county, primarily the San Rafael and Novato areas, would see 30-minute-plus delays with a foot of higher bay water over the next 20 years, the study shows.

Other parts of the North Bay would see an only slightly better traffic situation, also because drivers have fewer ways to get around. 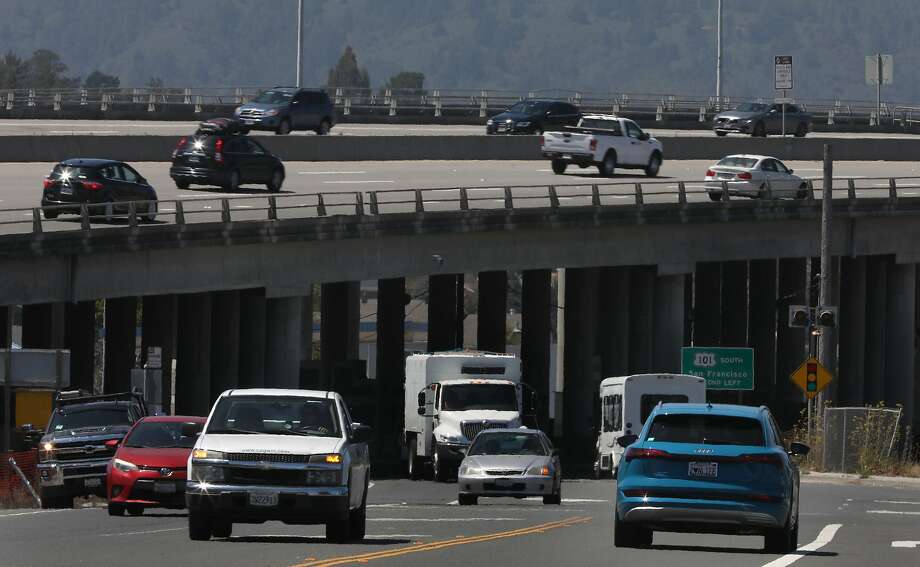 The new research, published in the journal Science Advances, does not speculate on how often the nuisance flooding will occur. But climate models show that 12 inches of coastal flooding, which the researchers used as their low-end estimate for projecting traffic delays, will become increasingly common.

Sea levels alone could rise nearly a foot by 2050 as temperatures climb, many models show. On top of that, high tides and big storms, also partly influenced by climate change, will push water levels occasionally higher, sometimes much more so.

“If there’s 12 inches of sea level rise and 12 inches of storm surge you’re already at 2 feet of flooding, and that’s not what you were experiencing before,” said Jessica Fain, director of planning for the San Francisco Bay Conservation and Development Commission.


Fain was not involved in the Stanford study, though her agency’s flood maps were used by the researchers to model what traffic would look like with higher water levels. The traffic data used for the modeling were from the Metropolitan Transportation Commission and the U.S. Census Bureau. The study focuses on commutes in private vehicles during morning rush hour.

The BCDC has done its own evaluations of how flooding will impact Bay Area traffic. The agency’s projections show that 12 inches of higher water would affect 700,000 vehicle trips per day in some way. The analysis looked at areas where the flooding occurred, in contrast to the Stanford study, which looks at the ripple effects beyond.

San Francisco, Santa Clara County and most of the East Bay, like San Mateo County, would experience few delays with a foot of flooding over the next two decades, according to the new study.

With 3 feet of water, however, which represents a more severe climate scenario but still within the range of expectations, San Francisco, San Mateo County and Santa Clara County would continue to see little additional congestion, though commuters in western Alameda and Contra Costa counties would begin to experience significant delays, the study shows.

Along parts of the bay shore, some residents won’t even be able to get to work because their route will be cut off with 3 feet of flooding, according to the study.

Fain, with the San Francisco Bay Conservation and Development Commission, says the potential for huge transportation problems underscores the need for regionwide preparations.

In 2016, Bay Area residents approved a nine-county parcel tax that generates about $25 million annually for restoration projects to help combat rising seas. Efforts to improve more vulnerable transportation corridors, such as Highway 37 in the North Bay, are already under way.

“Maybe San Francisco can build a seawall and Foster City can build a levee, but we need a regional way to coordinate all this,” she said. “You can’t just do it piecemeal.”

Our colorful clothes are killing the environment