A headline story in this week’s Barron’s Magazine (see Trump or Biden: These ETFs Should Climb Either Way) make a case that First Trust’s Clean Edge Green Energy Index ETF (QCLN) will generate decent returns regardless of who wins in November. Over the past 10 years, QCLN has delivered an annualized return of 9% and while there is no doubt a Biden victory would be seen as a “win” for green energy adoption from a high-level policy perspective, it’s important to acknowledge that QCLN is up 156% since Trump won the election in November of 2016: 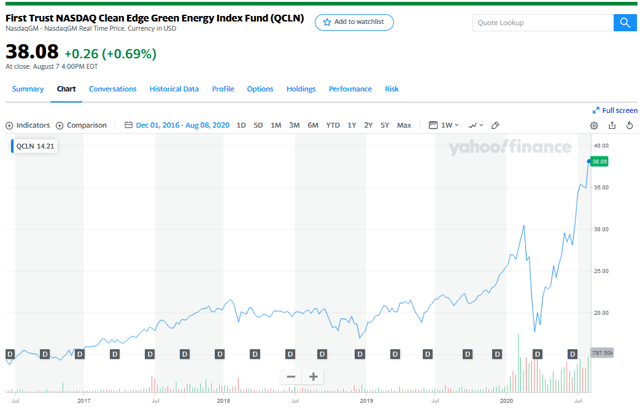 However, note the vast majority of those gains have come in the big NASDAQ rally since the March lows. And much of from the ETF’s #1 holding: Tesla (TSLA), which has a roughly 10% weight in the portfolio. Tesla is well-covered, so I won’t go into great details here on the positives/negatives of the company other than to mention that the stock’s valuation, in my opinion, is indicative that Tesla is being valued for more than an EV maker. Investors are starting to realize that Tesla will likely transform itself into an electric ecosystem provider, including batteries, battery storage systems, as well as the controllers and software that surround these systems.

The ETF has been successful during the Trump administration’s time in office because of continued steady and strong growth in wind and solar capacity in the United States. In fact, wind and solar will dominate new energy capacity in the US this year. Of the 42 GW of new electricity capacity this year, the EIA expects solar and wind will represent nearly 32 GW, or 76%, of the additions: 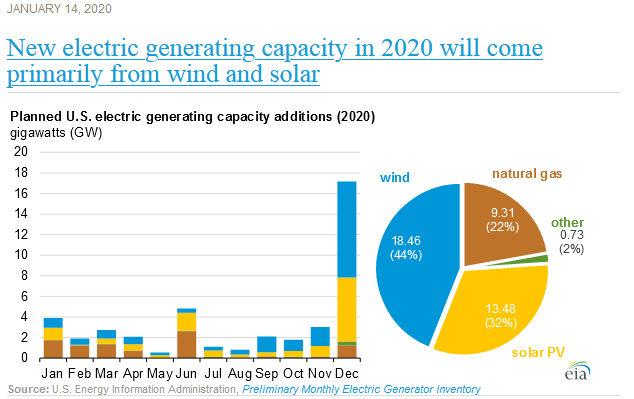 Wind accounts for the largest share of additions at 44%, followed by solar and natural gas at 32% and 22%, respectively. The 18.5 GW of wind and 13.5 GW of new solar coming online this year would beat previous annual records for both of the renewable sources.

Most of the added capacity is expected to go in-service in December. That said, much of the infrastructure equipment is bought well ahead of the in-service date and should begin to show up in EPS reports well before then. Point is, there apparently is a large amount of capital being deployed in the second half of this year toward wind and solar infrastructure. That will provide a tailwind for many of the stocks in the portfolio.

As the top-10 holdings above show, QCLN is a fairly concentrated portfolio. There are only 42 holdings in the ETF, and the top-10 equate to ~55%. Don’t let the “Oil & Gas” descriptors scare you off, these are obviously not O&G stocks – just an indication that the First Trust marketing team has some work to do. 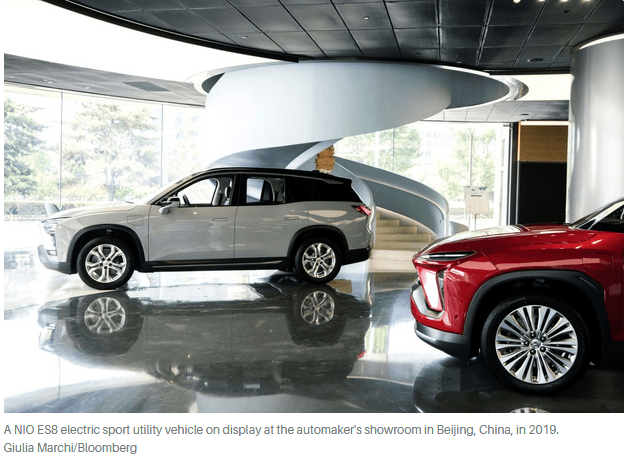 The number two holding is NIO Limited (NIO). In addition to Tesla, NIO is another reason for QCLN’s excellent performance – the stock is up 350% over the past 12 months. On August 3, the Chinese based EV maker announced delivery growth of 322.1% to 3,533 vehicles in July.

Solar-specific companies like SolarEdge (SEDG) and First Solar (FSLR) are well represented at a combined weighting of ~10.6% in the portfolio. First Solar was up 13% on Friday after Q2 earnings beat on the top and bottom lines and an upgrade to Buy at BofA.

Semiconductor equipment companies Cree (NASDAQ:CREE), ON Semi (ON), and Universal Display Corporation (OLED) are also prominent top-10 holdings with an aggregate weighting of ~11.4%.

As mentioned earlier, the ETF has a concentrated portfolio. That’s great on the upside, but can be just as bad on the downside (note the swoon in March).

One obvious risk is the two high-flyers, Tesla and NIO, and where they can go from here. Tesla has a challenged second half of the year for two reasons:

But don’t count out Tesla’s new manufacturing facility in China. I thought about that yesterday while watching the PGA Championship. The ESPN announcers were giving Haotong Li, a Chinese national, a hard time for hitting the driving range after finishing his round. And the practice green, and the chipping green. Take rest they said, save your energy for tomorrow. When he finally went into the sand trap to practice, I thought the announcers were going to fall off their chairs. What they failed to mention was that Haotong Li was the tournament’s 18-hole leader. Given the current status of relations between the US and China, I am sure he would love nothing more than to win this tournament. My point here is work ethic: the Chinese worker has it. The ETF’s top two holdings, Tesla and NIO, will keep benefiting from the Chinese worker. In addition, China is likely fully supportive of Tesla’s Gigafactory in Shanghai to show the world that China is, still, a good place to invest in and open your business. Elon Musk recently visited Tesla’s Shanghai Gigafactory to boost morale and told reporters “China Rocks.” Will Tesla meet its 2020 production targets? I certainly would bet against Musk and the China Gigafactory.

As bullish as I am on the future of EVs, and renewables like solar and wind, there is no doubt the current valuation of the fund is on the high side: price-to-book is 3.2x, P/E=32, and price-to-sale is at 2.9x. That said, in a negative real interest rate environment, investor capital is looking for growth – and QCLN certainly is stocked full of growth companies.

Lastly, it seems odd to me that NextEra (NYSE:NEE) did not make it into the top-10 holdings (it has only a 2.6% weighting). Building on the back of large investments in wind and solar, NEE is now the largest utility in the country. A higher weighting in NEE could have added some stability and dividend growth potential to the portfolio.

The Clean Edge Green Energy Index is a strong performing ETF and a concentrated bet in the sector. It has skyrocketed since the market lows in March. For the long-term investor, who wants to allocate a portion of his/her portfolio to green energy and simply forget about it, the QCLN ETF is a rational way to have exposure to a relatively concentrated group of companies in the sector. For such an investor, I suggest you initiate a small start position in the ETF so you will be ready to pounce on shares during a severe market sell-off, or simply on a day when Tesla is being heavily sold. Both events are possible considering the market is arguably and considerably over-bought given the present economic reality in the US, and that shares of Tesla (a 10% holding) are trading at a high valuation. Lastly, while it is clear QCLN has delivered decent returns over the last four years, a Biden victory would likely be a catalyst to the upside and a tailwind to higher performance.

Disclosure: I am/we are long IDRV. I wrote this article myself, and it expresses my own opinions. I am not receiving compensation for it (other than from Seeking Alpha). I have no business relationship with any company whose stock is mentioned in this article.

Additional disclosure: I am an engineer, not a CFA. The information and data presented in this article were obtained from company documents and/or sources believed to be reliable, but have not been independently verified. Therefore, the author cannot guarantee their accuracy. Please do your own research and contact a qualified investment advisor. I am not responsible for the investment decisions you make.

Does mining fit into a clean energy future?

Royal Dutch Shell to Cut up to 9,000 Jobs as Oil Slump Accelerates Green Energy Drive. The Stock Is Falling.