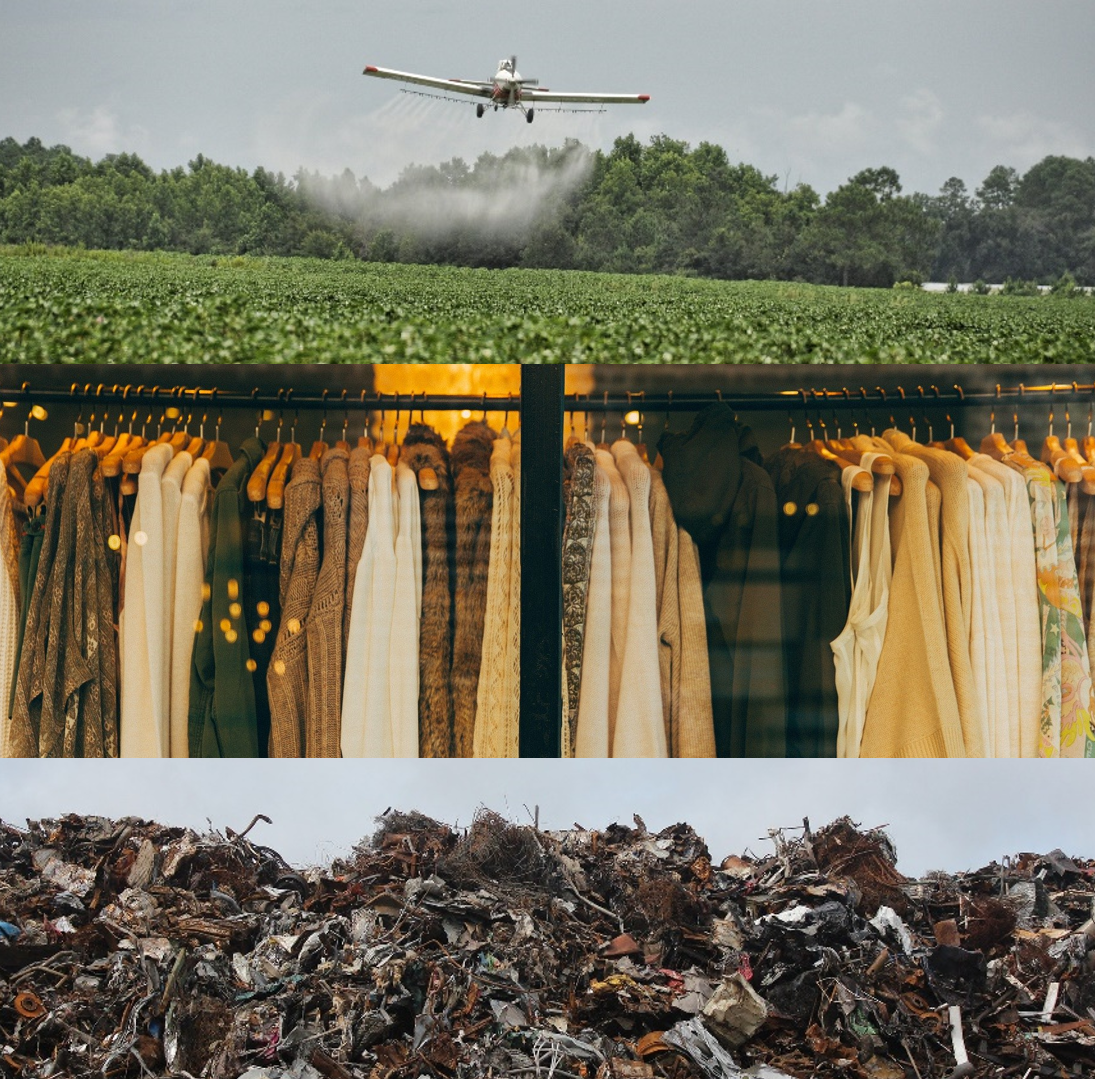 (Beyond Pesticides, September 17, 2020) The apparel industry becomes the latest contributor to global biodiversity loss, directly linking soil degradation, natural ecosystems destruction, and environmental pollution with apparel supply chains, according to the report, “Biodiversity: The next frontier in sustainable fashion,” by McKinsey & Company. Although there are many studies on the fashion industry’s impact on climate change, much less research discusses the impact the industry has on biodiversity. The globe is currently going through the Holocene Extinction, Earth’s 6th mass extinction, with one million species of plants and animals at risk of extinction. With the increasing rate of biodiversity loss, advocates say it is essential for government agencies to hold the fashion industry accountable for the direct (i.e., excessive agrochemical use, water consumption) and indirect (i.e., water pollution from run-off) impacts on the environment, not only to protect the well-being of animals, but humans, as well. Researchers in the study note, “We expect biodiversity to become an even greater concern for consumers and investors in the coming years. Covid-19, instead of slowing the trend, has accelerated it—perhaps because people now understand more deeply that human and animal ecosystems are interdependent. It’s time for the apparel industry, which to date has contributed heavily to biodiversity loss, to now make bold moves in the opposite direction.”

People now, more than ever, are changing their sentiment toward sustainability, with two-thirds of consumers stating the importance of limiting climate change impacts, and 88 percent maintaining that more attention should be given to pollution reduction. Although apparel companies are cognizant of climate change, initiating numerous projects for carbon neutrality, the relationship between climate change and biodiversity—a “distinct but related issue”— is less apparent in the apparel industry. Climate change and biodiversity loss are interdependent, and an adverse impact on one can bolster an adverse effect on the other. Biodiversity is intricate and affects all environmental ecosystems—from oceans and freshwater to forests and soils; it encompasses all life forms on earth. Furthermore, without biodiversity, global reliance on food, energy production, clean water, fertile soil, sustained air quality, and climate regulations will suffer. Researchers remark, “Through our analysis of quantitative impact indicators as well as industry-expert interviews, we have developed a good understanding of how each part of the apparel value chain affects biodiversity.”

To determine how the apparel industry contributes to biodiversity loss, researchers examined each stage of the apparel supply chain, including raw material production, material preparation and processing, production manufacturing, transportation and distribution, retailing, product-use life, and end-use. Researchers assess the negative impacts that each stage of the apparel supply chain has on biodiversity, analyzing land and water use patterns, chemical pollution, waste production, and energy consumption. Additionally, researchers developed a “biodiversity impact area” map using data from the International Union for Conservation of Nature (IUCN) to determine the severity (high, medium, low) of impact on biodiversity from each apparel chain sector on land and water use, pollution, climate change, and overexploitation.

The results of the report identify the apparel sector’s five largest contributors to biodiversity loss in order of overall value added to the apparel industry: cotton agriculture, wood-based natural fibers/synthetic manmade cellulose fibers (MMCFs), textile dyeing and treatment, microplastics, and waste. All five contributors come from three stages in the apparel sector: raw-material production, material preparation and processing, and end-use. Raw material and production have the highest levels of land, water, and energy use, with chemical pollution following close behind. Material preparation and processing have the highest levels of chemical pollution and energy consumption, preceding water use levels. The end-use sector has the most elevated waste levels of all apparel sectors. According to the “biodiversity impact area” map, most of the apparel industry sectors contribute to environmental pollution (i.e., chemical, physical, geological, biological) that impacts species biodiversity.

Many people, including regulators and corporations themselves, are aware of the adverse environmental impacts associated with the apparel industry, including the production of 10% of all global CO2 emissions, approximately 20% of all industrial water pollution, nearly 35% of oceanic microplastic pollution, and massive amounts of textile waste. Despite the environmental impacts, the fashion industry continues to grow and pollute due to the upsurge in “fast fashion,” which relies on cheap product manufacturing, frequent consumption of goods and services, and brief clothing use to meet consumer demands. Nowadays, the amount of material-use in fast fashion is increasing as clothing brands are generating nearly double the amount of clothing than in the early 2000s.

Just as regular apparel production and consumption, fast-apparel production and consumption increase CO2 emissions, uses an enormous amount of water (trillions of liters per year), and produces an immense quantity of textile waste, most of which companies burn or send to landfills/developing countries. Furthermore, the entire apparel manufacturing process uses countless chemicals that are hazardous to consumers, factory workers, and the environment, including chemicals that lead to ailments, like brain cancer. A few examples of chemical hazards also include pesticide use on crops that produce raw material, chemical contamination in soils from pesticides and synthetic fertilizers, and chemical run-off into waterways from textile dyes and microfibers. Additionally, some fabrics treatments involve the infusion of harmful antimicrobial agents, like titanium dioxide or silver nanoparticles (nanosilver), which can seep into a person’s sweat and absorb through the skin.

The apparel industry’s dependence on natural resources for the production of goods from raw materials demonstrates a need for sustainable practices to mitigate the risks associated with natural resource deficiency, including biodiversity loss. These businesses rely on the benefits of biodiversity and ecosystem services, such as pollination of crops and access to clean water for financial and operational success. With the global population increasing rapidly, the subsequent need for apparel will increase and result in significant biodiversity loss if the industry’s supply chain practices remain unsustainable.

Of the largest contributors to biodiversity loss, cotton agriculture, textile dyeing and treatment, microplastics from washing, and pollutants from waste have the highest impact on species biodiversity due to the presence of toxic chemicals, some of which the European Union classifies as hazardous to human health or the environment. According to this report, cotton agriculture is the most vital part of the apparel value chain, as cotton is the most popular, nonsynthetic fiber globally. In addition to being a water-intensive crop, utilizing over 700 gallons of water to make one t-shirt, cotton only grows on 2.4% of farmland worldwide, is one of the most agrochemical intensive crops, applying 22.5% and 10% of the world’s insecticides and all pesticides, respectively. Additionally, chemical pollution from MMCFs manufacturing, which creates fibers from cellulose in wood, can impact soil and water quality in areas of logging and processing, resulting in habitat loss and endangering various species endemic to the region.

Textile dyeing and treatment, as well as microplastics, mainly impact the marine environment, with dyeing and treatment accounting for 25% of all industrial water pollution. Microfibers (a type of microplastic) pollute waterways, with 7.5 million tons of microfibers ending up in the oceans from standard washing (i.e., hand-wash, machine-wash) annually. These microfibers are often synthetic and contain toxic chemicals that poison marine wildlife and accumulate higher up the food chain. Lastly, a majority, 73%, of textile waste ends up in landfills or incinerators, yet, only 12% degrades overtime, and less than 1% gets recycled. Landfill development can account for a loss of nearly 30 to 300 species, and the remaining waste can release pollutants into the surrounding habitat and contribute to habitat loss. The authors of the report conclude, “For the apparel sector to slow broader global biodiversity loss, a radical shift from business, as usual, will be necessary.”

In this report, researchers offer four innovative intervention areas for companies to focus on to reduce the industry’s impact on biodiversity:

Additionally, the authors suggest that companies lead the way in transforming the apparel industry into a more sustainable enterprise:

As the global population reaches eight billion people, the need for apparel will increase along with harmful chemical use, excessive landfill waste, and extensive pollution in terrestrial and aquatic environments. Although recycling used clothing can help alleviate waste management in the apparel industry, the industry still uses harmful chemicals to maintain crop yields  and manufacture/process materials that can have adverse impacts on human, animal, and environmental health.

With the Trump administration dismantling many environmental regulations, including waterway monitoring, it is vital to understand how chemical pollutants from textiles and pesticide use in croplands can increase the risk of biodiversity loss.

Making sustainable apparel choices can aid in the reduction of biodiversity loss due to the lack of harmful impacts on the environment from chemical, waste, water, and land pollution. Additionally, buying, growing, and supporting organic can help eliminate the extensive use of pesticides in agriculture and the environment. Organic agriculture has many health and environmental benefits, which can eliminate the need for chemical-intensive agricultural practices in the apparel industry. For more information on how organic is the right choice for both consumers and the farmworkers who grow the crops for our clothing, see Beyond Pesticides webpage, Health Benefits of Organic Agriculture.

The Sudbury model: How one of the world’s major polluters went green