Sales of solar bonds hit around $2 billion in the first six months of the year, roughly double levels during the same period in 2020 and 2019, according to deal tracker Finsight.com. The bonds, which are backed by bundles of loans made to homeowners for panel purchases, are being issued by a handful of financing companies that specialize in residential solar panels, including GoodLeap LLC, Sunnova Energy Corp. and Solar Mosaic Inc. 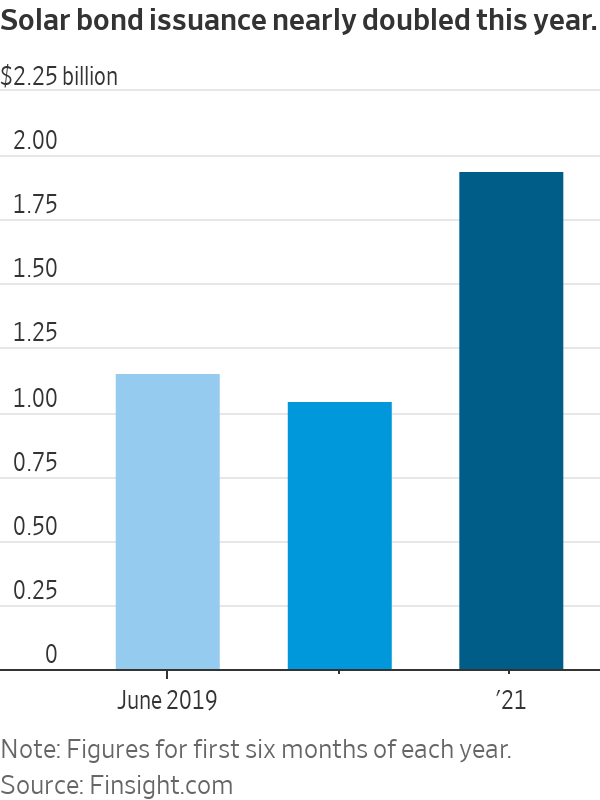 By tapping bond markets, the companies are connecting fund managers looking for eco-friendly investments with homeowners who want to get cheaper—and potentially more reliable—electricity while cutting their carbon footprints.

“It came down to cost and the environment,” said Josh Rudin, a 34-year-old real-estate attorney who took out a 10-year loan from Solar Mosaic to install solar panels on the house his family bought in Woodbury, N.Y., this year. “We just started a week ago, and even with the bad weather, the system is producing 82% of our electricity.”

The solar panels cut the cost of his electricity purchases from the grid by 95% and qualify him for about $15,000 in federal and state tax credits. Even after accounting for loan payments, his monthly power expenditure will fall, saving him about $8,500 over the life of the loan, according to EmPower Solar, the company that sold him the equipment. Payments on the loan will remain fixed, and when the panels produce more electricity than he uses, Mr. Rudin can sell the excess to his local power grid, he said.

Demand for the loans is accelerating this year amid more violent and unpredictable weather patterns, said Tanguy Serra, president of GoodLeap LLC, the largest issuer of solar bonds. “The wildfires in California, the Texas winter, the outages in Louisiana, they’re all large-scale advertising for the product,” he said.

Hurricane Ida cut power to roughly one million customers in New Orleans and Mississippi and 200,000 people in New York, New Jersey and Pennsylvania this past week.

Bond investors like debt backed by solar loans because the borrowers must own their homes and have good mortgage track records to qualify, said Katrina Niehaus, head of corporate structured finance at Goldman Sachs Group Inc., which arranges solar bonds. Buying the securities also helps asset managers meet environmental, social and governance, or ESG, investing targets required by their clients.

“‘The wildfires in California, the Texas winter, the outages in Louisiana, they’re all large-scale advertising for the product.’”

Growing appetite for the bonds is lowering borrowing costs for companies like GoodLeap. Investors bought the bulk of the firm’s most recently issued bonds at a yield of 1.94%, compared with 2.77% on a deal done in July 2020, according to Finsight.com.

Solar energy systems can cost $30,000 or more, and until recently, most homeowners had two choices when purchasing them: pay cash or sign a lease. Over the past five years, solar financing companies scaled up operations by borrowing money from banks and credit unions, then lending it out to customers of panel vendors like EmPower.

The companies use algorithms to rapidly assess and approve borrowers, collect fees on the loans and then sell them to fund managers. Loans accounted for 63% of solar financing in 2020, up from 21% in 2015, Mosaic Chief Executive Billy Parrish said.

Initially, finance companies sold much of their loans and bonds to hedge-fund managers. Alternative fund manager CarVal Investors LP has purchased more than $500 million worth of loans from GoodLeap and Blackstone Group Inc. bought large quantities from the company when bond markets seized up in the summer of 2020, people familiar with the matter said.

The solar bond market is still small, but it is now starting to attract larger traditional investors, said Rob Camacho, co-head of structured credit at Blackstone. “This market is going to grow a lot, so you have money managers willing to spend time on it,” he said.

BlackRock Inc., the largest fund management company in the world, has begun buying solar bonds, a person familiar with the matter said.

Are you considering buying solar panels and, if so, for what primary reason? Cost savings, reliability of power or environmental impact? Join the conversation below.

As the market expands, so could the risk in the loans backing solar bonds. The average FICO score of solar loan borrowers is roughly 745, but “there’s definitely the possibility that the industry will expand to borrowers that are in the lower credit spectrum,” said Melvin Zhou, an analyst at Kroll Bond Rating Agency LLC.

Increased government support is playing a part in the industry’s growth, said Bryan White, a solar analyst at market research firm Wood Mackenzie. The 26% federal investment tax credit on residential solar panels is slated to expire fully in 2024, but the Biden administration and Democrats in Congress are working on extending that by as much as eight years through the current budget reconciliation process, he said.

Write to Matt Wirz at matthieu.wirz@wsj.com

Pulaski County will shift to near 90% solar power

Lorde ushers in a new era with ‘Solar Power’

How to discuss climate change productively