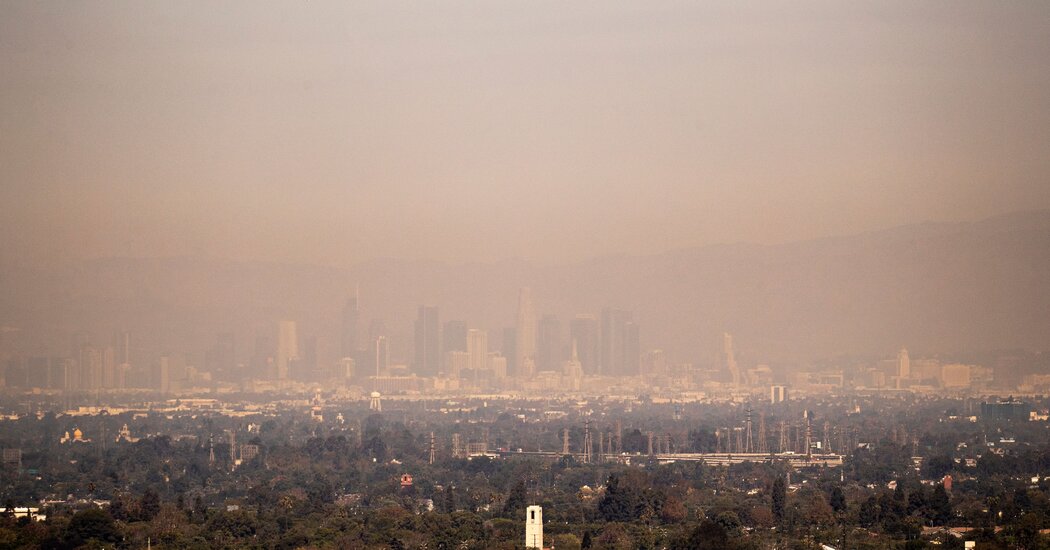 Air pollution sickens and kills millions every year. Here’s how the new measure will help tackle the problem.

The climate and tax bill expected to pass on Friday afternoon has a huge benefit that you might not have thought about: It’ll go a long way toward improving health throughout the United States.

The package — which, when signed by President Biden, will be America’s first major climate law — is an important step in the fight against global warming. But even if all countries take fast, decisive action to cut greenhouse gas emissions, it’ll take some time for the planet’s temperatures to stabilize.

Public health gains from the measure, on the other hand, should be much more immediate. Today, I’ll explain the various benefits and why they matter.

The burning of fossil fuels emits dangerous air pollutants like fine particulate matter, known as PM 2.5, that can penetrate deep into our lungs and even enter our bloodstreams.

This microscopic pollution, named because each particle is smaller than 2.5 micrometers across, has been shown to worsen asthma and other lung disorders, and increase the risk of heart attack and stroke. It’s also been linked to developmental problems in children.

Pollution from fossil fuels contains other nasty stuff, too, like carbon monoxide, nitrogen dioxide and sulfur dioxide. All very unhealthy.

The climate and tax package is designed to bring sharp declines of these pollutants by helping the United States clean up its energy grids faster.

Analysts haven’t had much time to gauge exactly how the new law would affect health, but the research we have points to significant gains.

To give just one example, according to an analysis being led by John Larsen, a partner at the consulting firm Rhodium Group, by 2030 the new law will cut emissions of sulfur dioxide up to 82 percent below 2021 levels. America’s air was already getting cleaner, but that’s a big improvement over the current trajectory. Without the new measure, sulfur dioxide was projected to decline up to 63 percent.

In another analysis, published last week, the research group Energy Innovation estimated that shutting down coal-fired power plants in the United States and reducing methane emissions would start to yield public health benefits as early as next year and ultimately avert up to 3,900 deaths in 2030.

The benefits of the law could be especially felt by communities of color, which are often near big sources of pollution like busy roads, industrial sites and power plants. As my colleagues Hiroko Tabuchi and Nadja Popovich wrote last year, Black Americans are exposed to higher concentrations of PM 2.5 from all sources.

These communities sometimes fall through the cracks of air quality monitoring networks in the United States. Those systems are some of the best in the world, but more granular data could make a huge difference, said Christa Hasenkopf, who leads air quality programs at the Energy Policy Institute at the University of Chicago.

She explained to me that a city may have several air quality monitors spread out that are reporting an average level of pollution that isn’t harmful, but the system could still miss the few blocks where levels are extremely high.

A report by the REPEAT project at Princeton University shows the law directs at least $60 billion to projects that will help protect communities that are overburdened with environmental problems.

The possible health effects of those provisions haven’t been modeled by researchers yet. Robbie Orvis, a senior director at Energy Innovation, told me outcomes will depend on how these measures are implemented and, especially, how states spend the money.

“There’s definitely some uncertainty about where the money will flow and what communities will benefit,” he said. The work of estimating the effects of the law “isn’t done yet.”

Raising American ambition to tackle global warming could also help build momentum for renewable energy investments in other countries, Hasenkopf said. That would be a big step forward in addressing air pollution on a global level.

A recent study in The Lancet estimated that more than 6.5 million people worldwide die from air pollution every year, and fossil fuel emissions are a primary cause. And more than 90 percent of deaths caused by pollution happen in low and middle-income countries.

In India, air pollution is estimated to shave five years, on average, from people’s lives. Americans lose an average of about two months.

But the invisibility of air pollution makes the problem hard to tackle, Hasenkopf said. According to a recent assessment that she helped coordinate, just 0.1 percent of grants each year by philanthropic groups are focused on air quality.

“It’s a huge burden on our public health globally,” she said. “But it really flies under the radar. It’s neglected.”

Related: How clean is the air you breathe compared with other major cities in the world? You can find out here.

Essential news from The Times

Arctic warming: The region is heating up more rapidly than previously described, a new study found. Some parts are warming seven times faster than the global average.

Green mission, dirty partners: A United Nations sustainable development agency has worked with energy companies to keep oil flowing, including in the Amazon.

Winners and losers in the climate bill: Carmakers may take years to adapt their supply chains to the rules in the new climate bill. Some are better prepared than others.

New Zealand’s climate fight: The country is converting sheep and cattle ranches to “carbon farms.” The transition threatens a major source of employment.

What fools these mortals be: Across the United States, rising temperatures, wildfires and floods are forcing the cancellation of outdoor theater performances.

Congo’s rainforest: The United States is urging officials in the Democratic Republic of Congo to reconsider their plans to auction peatland and rainforest plots for drilling.

New laws of the land: Sierra Leone will require companies to get express consent from local communities before starting mining, industrial or farming projects.

From outside The Times

Before you go: The oil money funding climate protests

The heirs of two American oil fortunes are supporting groups trying to block fossil fuel projects. Protesters from the organizations have chained themselves to banks, rushed onto a Grand Prix racetrack and tethered themselves to goal posts as tens of thousands of British soccer fans jeered. Why? One donor said she was worried about the possibility of human extinction. Another called it a “moral obligation.”

Correction: Because of an editing error, the Tuesday newsletter misstated the year of the presidential election in which Jimmy Carter was defeated by Ronald Reagan. It was 1980, not 1979.

Thanks for reading. We’ll be back on Tuesday.

Reach us at climateforward@nytimes.com. We read every message, and reply to many!