WASHINGTON: A killer asteroid has become the subject of myriad online jokes and memes, but “planetary defense” is a deadly serious international security endeavor involving scientists around the world — with NASA set in September to undertake a world-first effort to deflect a (non-threatening) asteroid off its natural course.

Meanwhile, eyebrows were raised this month after the publication of a scientific paper by Chinese scientists that proposed placing satellites in cislunar space to act as an early warning system for asteroids, or even to physically alter their paths. That paper was theoretical, but reflects a genuine interest from the Chinese government in detecting and heading off dangerous Near-Earth Objects (NEOs) before they get too close.

But like in so many other areas, that scientific quest also has become yet another source of suspicion and tension between the US and China.

This is perhaps unsurprising. In both the US and China, the military has a role in research and development of foundational technologies for moving or destroying a giant space boulder headed for Earth. And broadly, many of those technologies, from kamikaze spacecraft to nuclear missiles, could be used as weapons.

The kerfuffle over the news reports about the scientific paper, said Secure World Foundation’s Victoria Samson, highlights the increasing risks of misunderstanding as tensions mount between the US and China over space activities, and the need for governments to be transparent about their proposed research efforts.

“There is a need to clarify intentions and to be as transparent as possible so that programs … are not misunderstood to be offensive in nature,” she said.

New US Focus On NEOs

NEOs have been an issue of concern for space scientists and military space leaders for some three decades, but until recently research on detecting potentially dangerous asteroids languished in budgetary limbo with no centralized government sponsor.

In 2018, the White House published a “National Near-Earth Object Preparedness Strategy and Action Plan” [PDF] that named NASA as the lead agency. And in 2019, the National Science and Technology Council set up an interagency working group to implement the plan, including: the Defense Department, NASA, the Office of Management and Budget, and the Departments of Commerce, State and Homeland Security. That group issued its first report [PDF] in January 2021.

Planetary defense further was included in the 2020 memorandum of understanding between NASA and the Space Force on cooperative research, which also focused on mutual interests such as space situational awareness in the vast volume of cislunar space between the Earth’s outer orbit and that of the Moon.

This year, planetary defense for the first time was among the top priorities for future research by NASA, and other government research agencies, including the Defense Department, laid out in the latest National Academies’ “decadal survey” on planetary sciences and astrobiology.

Published in April, the study, “Origins, Worlds, and Life: A Decadal Strategy for Planetary Science and Astrobiology 2023-2032,” provides a scientific consensus on research needs in the field over the next 10 years. While not legally binding, the study is used by the White House and Congress to focus interagency efforts and, in particular, NASA’s budget. 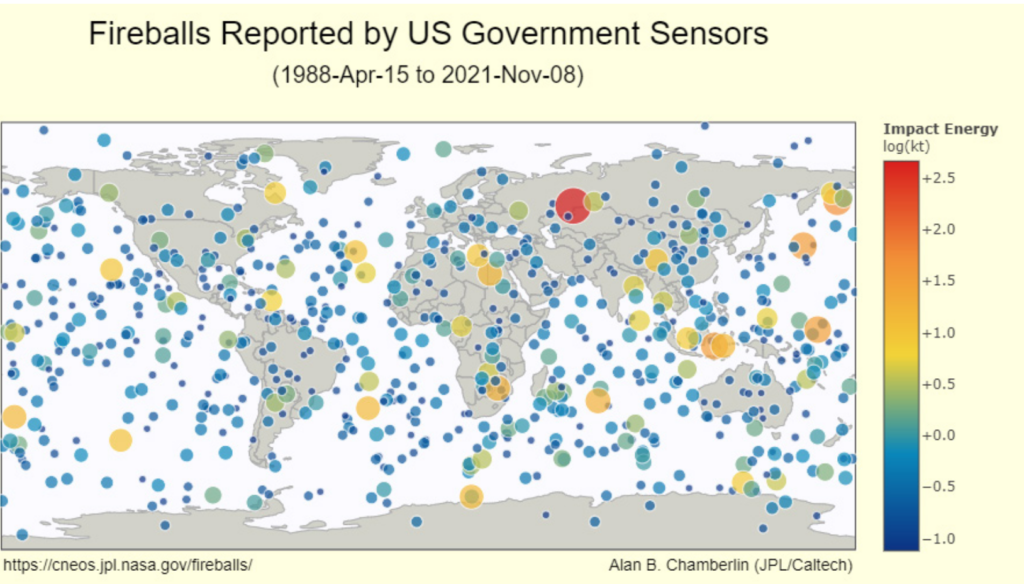 “The threat to Earth from potentially hazardous objects is a low-probability yet high-consequence hazard recognized and documented in several academic and government reports. Efforts to address this threat are most effective when undertaken on a continuous, long-term basis through cooperation between NASA, [the National Science Foundation], U.S. Space Command, and other U.S. government entities,” the study said.

Among the survey’s recommendations was that NASA and SPACECOM work more closely together and exchange information on detection of NEOs, including in cislunar orbits.

In the fictional Star Trek, “ramming speed” is the signal for the ship’s navigator, Hikaru Sulu (played by the inimitable George Takei) to throttle up the USS Enterprise in order to bash into an otherwise unstoppable enemy. Similarly, the goal of NASA’s Double Asteroid Redirection Test (DART) mission is to autonomously steer a spacecraft into an asteroid, but in the hope of pushing it off course rather than destroying it.

The DART spacecraft, built and managed by the Johns Hopkins Applied Physics Laboratory (APL) in Laurel, Md., was launched on Nov. 24, 2021. The plan is for the spacecraft in September to strike the moonlet in a small binary asteroid pair far enough away from Earth to do no damage. And though the spacecraft has to travel millions of miles to reach it’s target, NASA already knows the precise moment of impact.

“The DART spacecraft is on course to impact the moon of asteroid Didymos, called Dimorphos, at 7:14 pm EDT 26 September, 2022,” a senior NASA scientist told Breaking Defense in an email on Tuesday.

The suicidal DART spacecraft is carrying a camera-equipped CubeSat, built by the Italian Space Agency, that will separate before the impact and film the results. The European Space Agency’s Hera project subsequently “will conduct detailed surveys of both asteroids, with particular focus on the crater left by DART’s collision and a precise determination of Dimorphos’ mass,” according to NASA’s website.

The NASA scientist said that it will take “weeks to a couple of months” before scientists can “determine the effect we had on the moon’s orbit.”

The ultimate goal right now, however, isn’t to build a fleet of planetary defense ships as a shield in space, the scientist explained.

“An asteroid impact of significance is an extremely rare event. Maybe once a century might there be something that we’d really need or want to deflect in space. A lot of funding would be wasted trying to maintain deflection systems ‘at the ready’, with technology that will probably be completely obsolete by the time actually needed,” the source said. “The better strategy is to find them years to decades in advance of an impact threat, which we now have the technology to do but just need to get more serious about doing so (read funded), and that would provide sufficient time to use whatever the technology will be at that time to do a deflection.”

CNSA also intends to conduct an experiment very similar to DART sometime in 2025 or 2026, according to a comprehensive report by Space News.

And just this month, an article in a Chinese scientific journal, first reported in English by the South China Morning Post, proposed development of NEO observation telescopes on the Moon and satellites in cislunar space. The study, published July 20 in the peer-reviewed journal Scientia Sinica Informationis, was authored by a number of top Chinese scientists, including the chief designer of the government’s lunar exploration program, Wu Weiren.

The Hong Kong-based newspaper’s report, which stated that Chinese plan “included putting three guardian satellites carrying lots of fuel and kinetic weapons into the moon’s orbit around the Earth,” was quickly picked up by other outlets and raised eyebrows including among US government officials.

According to an informal translation provided to Breaking Defense by experts, the research paper doesn’t actually call for equipping satellites with “weapons,” as some media suggested. Rather, the study posits that there could be benefit in positioning maneuverable satellites based in in the L3, L4 and L5 Lagrange points (relatively stable spots in cislunar space) that not only could provide early detection of incoming asteroids, but also move to deflect or destroy them.

Such kinetic energy “impactor satellites” in cislunar space would “have the capability to intercept incoming asteroids in all directions, forming a defensive circle of approximately twice the Earth-Moon distance of approximately 800,000 km,” the study says, but caveats that more research needs to be done. Further, the concept explored in the journal article is simply a research proposal that doesn’t represent a funded government program.

Whether the Chinese embark on a mission as described is yet to be seen, but if it does, the US no doubt would expect Beijing to brief its plans to the UN body for coordinating national planetary defense activities. That body, the Space Mission Planning Advisory Group, meets twice a year in Vienna (although the most recent meeting in February was held virtually).