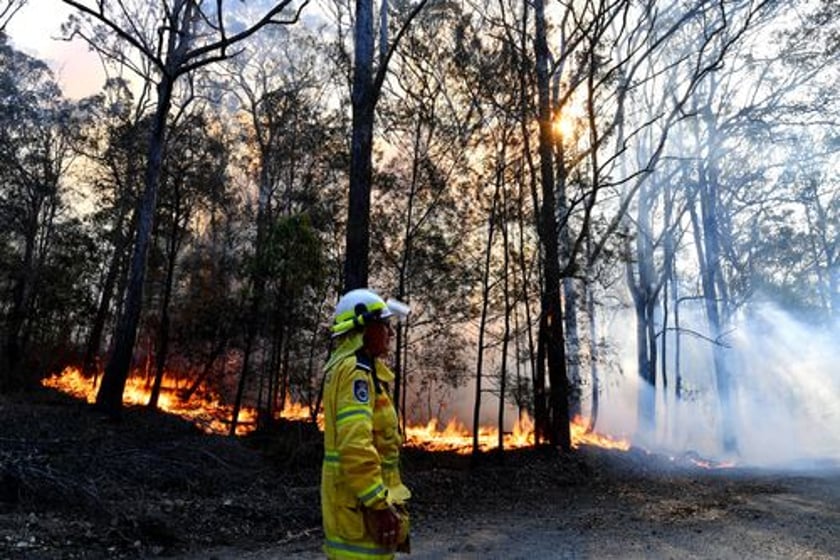 As Europe sweltered in the summer heat, Australians took stock of a new report that revealed just how much the country’s environment has deteriorated in the last five years.

“Our waters are struggling and so is the land,” said Labor’s new Environment Minister Tanya Plibersek, as she released the long-awaited State of the Environment report Tuesday. Though finished in 2021, the report wasn’t released by the previous Coalition government.

“When you read it, you’ll know why,” said Plibersek, who started the job six weeks ago, after the May election delivered a strong swing toward parties and independent candidates promising tougher action on climate change.

But despite the grim toll global temperature rises are having on Australia’s landscape, Plibersek said the new Labor government would not renege on its pre-election promise to allow new coal mines, if they won environmental approval and commercial support.

Nor would the government be raising Australia’s targets of cutting emissions by 43% on 2005 levels by 2030, or achieving net zero emissions before its stated target of 2050.

“There are some people who would say we shouldn’t have any mining anywhere. It’s just not a sustainable or reasonable proposition for a modern economy like Australia’s to say that,” she said.

“We made a promise on zero net emissions with an interim target of 43% carbon pollution reduction. We will keep that promise.”

The report noted that Australia’s emissions are likely to have peaked. But climate scientists say they are not declining fast enough to meet the Paris Agreement to limit the global average temperature rise to 1.5 degrees Celsius. According to researchers at Climate Analytics, Labor’s 43% target is consistent with 2 degrees Celsius of global warming.

How bad is the environmental degradation?

The report found that Australia has lost more mammal species than any other country in the 38 member Organization for Economic Co-operation and Development (a grouping that includes the United States, the United Kingdom, Canada and New Zealand); that there are now more foreign species than native ones; and the country has experienced “a plague of marine plastics,” Plibersek said in a speech to the National Press Club following the report’s release.

In the country’s northern waters, lost or abandoned fishing nets are strangling up to 14,000 turtles a year, and down the eastern coast, warming seas have killed kelp beds, threatening reef habitats and abalone and lobster stocks, she added.

On land, more than 77,000 square kilometers (30,000 square miles) of habitat belonging to threatened species have been cleared in the past two decades — an area roughly the size of Tasmania or Ireland. “Much of this clearing occurred in small increments,” Plibersek said. “In fact, more than 90% of it was never assessed under our environmental laws.”

The clearing has impacted Australia’s koalas, which are now endangered in three states and territories.

Since the last State of the Environment report was released in 2016, there’s been an 8% increase in species listed as threatened under the country’s Environment Protection and Biodiversity Conservation Act (EPBC).

The most recent report said the number of endangered species could be even higher due to inadequacies in the risk assessment process, and so too could the number of extinctions.

“Most mammal extinctions in Australia have been driven by predation from introduced species, especially the feral cat and European red fox,” it added.

What’s the government doing about it?

The Labor government laid the blame for Australia’s environmental degradation squarely at the feet of the Liberal-National coalition, who were in power from 2013 until losing the May election.

“The previous government’s funding cuts held back business, they damaged the economy, and they undermined practical efforts to protect our environment,” Plibersek said during a televised press conference. She added that so little effort had gone into achieving some targets that they would be almost impossible to reach.

Opposition environment minister Jonno Duniam, from the Liberal Party, accused Plibersek of using the report as a prop for attacks on the previous government, pointing out that the Morrison administration spent billions of dollars on green initiatives.

“We focused on the job, without wasting the majority of our energy on misguided attacks on our political opponents,” Duniam said in a statement, less than two months after a bitter election campaign that saw both parties attack the other on policies covering everything from the environment to relations with China.

Plibersek announced a number of new targets on Tuesday, but deferred others — including a “once-in-a-generation” reform of Australia’s environment and biodiversity laws (the EPBC) — until she had time to consult more widely.

The Labor government also plans to “expand the country’s national estate” by setting a goal of protecting 30% of Australia’s land and 30% of its oceans by 2030, and exploring the creation of new national parks and marine protected areas, Plibersek said. That includes “pursuing” the East Antarctic Marine Park, a proposal backed by Australia, France and the European Union to protect a vast tranche of the Ross Sea.

“We are so lucky to be so rich in First Nations cultural heritage, of course we need to have better systems for protecting it that don’t lead to appalling, shameful outcomes, like Juukan Gorge,” Plibersek said.

The report also highlighted the need to give Australia’s First Nations people more control over the protection and rehabilitation of the land. To that end, the government has also promised to double the number of Indigenous rangers to 3,800 by the end of the decade.

Nicki Hutley, an economist with the Climate Council, said changes to Australia’s environment laws must oblige the government to consider the impacts of climate change when considering applications for new coal and gas projects.

Earlier this year, the previous government won an appeal against a court ruling that would have compelled the federal environment minister to consider the impact on children of new coal projects.

“To halt Australia’s nature crisis we need strong national environment laws, an independent regulator to enforce them and adequate funding for the recovery of Australia’s threatened species and the restoration of degraded landscapes.”

Correction: An earlier version of this story attributed the Liberal Party’s response to the party’s deputy leader. The comments were made by the party’s environment minister.