Carbon Footprints: How to Advance Transparency and Prevent Greenwashing


Carbon Footprints: How to Advance Transparency and Prevent Greenwashing 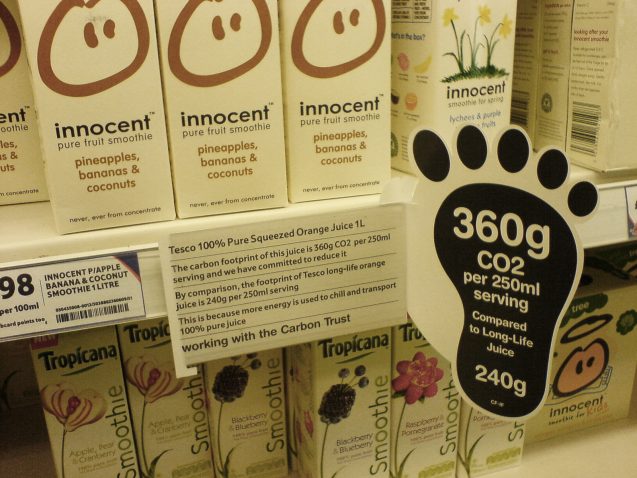 Signage on a supermarket shelf gives the carbon footprint of a box of fruit smoothie. Photo: gwire

With many people stuck at home during the early stages of the pandemic, backdrops of orange ash-filled skies, flash flood events, and record setting heat waves made climate denial more difficult. Last year, the sixth IPCC report warned global temperature rise would exceed 1.5℃ without radical policy intervention to reduce greenhouse gas emissions. There is already an abundance of literature to suggest what kinds of interventions might make a substantial impact. For instance, a 2019 UN International Resources Panel report revealed consumerism outranks global population growth as the leading driver of resource depletion and greenhouse gas emissions. But even as climate consciousness reaches new heights, consumer economies in wealthy western countries are only beginning to make changes toward a sustainable future. Consumers are driving companies to be more transparent by patronizing more eco-conscious brands.

Enter the product carbon footprint. Carbon footprints are a step in the right direction for climate-savvy consumers who want to hold brands accountable for their greenhouse gas emissions. While the standards and verification methods for how to determine these footprints have matured over the past decade, insights into how best to communicate the footprints are nascent. Without more clarity around how consumers understand and use the footprints, what do they really mean? How can consumers and brands genuinely use carbon footprinting in alignment with climate goals that stave off a global temperature rise of 1.5℃?

In 2018, the Columbia Climate School’s Christoph Meinrenken developed a tool called the Carbon Catalogue that helps communicate carbon emissions associated with each stage in the lifecycle of a product. This free interactive data visualization tool shows the carbon footprints of hundreds of commercial and consumer products, and makes it easy for everyone to understand the carbon emission levels of everyday products. The inventory of the tool spans 866 products from 145 companies and uses data from CDP (formerly the Carbon Disclosure Project) from 2013 to 2017.

While CDP is one of the larger international carbon accounting organizations, similar life cycle assessments can be calculated with the guidance of other agencies. There are three leading standards that have been instructive in collectively establishing international standards for carbon footprint calculations: the Greenhouse Gas Protocol, ISO 14067:2018, and PAS 2050:2011. Noncompliance with these standards by companies who claim earnest calculation efforts now represents a major reputational risk, and both savvy consumers and investors will recognize it as greenwashing.

It’s also notable that the Securities and Exchange Commission recently began the process to propose a rule mandating large companies disclose their climate risk. The proposal has been a long time in the making, drawing from lessons learned in 2010. If implemented, the rule would be a landmark win for the Biden administration on climate. Companies would be held accountable to a number of new filing requirements, including greenhouse gas emissions. Scope 1 emissions (those directly caused by company-owned or operated facilities) and Scope 2 emissions (byproducts of energy purchased and consumed by the company) would be standard for all companies to report. However, Scope 3 emissions (caused by activities from assets owned or controlled by upstream or downstream partners of the reporting organization) reporting is more complicated, and exemptions and loopholes abound. Still, if the SEC’s proposed rule isn’t struck down by the courts, the impact would be profound. If companies are legally required to track and disclose their emissions, they will have the information necessary to engage consumers with an honest climate platform.

The pandemic has brought about a clear shift toward eco-consumerism. Though consumer spending has increased 11% year-on-year since the beginning of the pandemic, 52% of respondents in a 2021 PwC Global survey said they are more eco-friendly in their purchasing practices than they were six months prior.

There are a number of different ways companies can capitalize on this mounting interest. The Carbon Catalogue visualization tool presents multiple strategies companies are employing to reduce emissions, and the data shows that several companies have made vast improvements in reducing their products’ emissions. Some companies have already started to adopt their own product carbon footprint tools, some have opted for carbon labels on their products, while others have robust customer education platforms online and in-store. In the absence of policy about how to present product carbon footprint information, we are sure to see a proliferation of methods to disclose. The problem with this is that without a unified format of how the footprint is communicated, consumers may not know what to look for, how to decipher the environmental impact, or even where to find it. Likewise, where and how the information is made available raises questions of equity and intentionality. If a product’s carbon footprint information is only available online, the audience is more likely to be a whiter, wealthier in-crowd. If it is only a physical label on the product itself, with limited space, clarity could be sacrificed for accessibility.

Multilateral coalitions within industry are forming to meet the challenge. Rightfully so, as the pace for action must accelerate drastically. The latest update to the IPCC’s sixth assessment report asserts emissions must peak by 2025 if we are to limit global temperature rise to 1.5℃. The report also provides pathways across all sectors to halve greenhouse gas emissions by 2030. Promising developments to better coordinate industry include the Coalition on Materials Emissions Transparency (COMET) Framework, an initiative formed by the Columbia Center on Sustainable Investment, the Payne Institute for Public Policy at the Colorado School of Mines, RMI, and the United Nations Climate Change Secretariat. COMET guides member organizations to better integrate greenhouse gas reporting and climate finance.

To evolve from laissez-faire carbon transparency, policy makers should start with legislation that gives financial incentives for companies using carbon accounting to meet science-based climate goals. Companies are seizing the opportunity to capitalize on the newfound climate-consciousness of many consumers, but that doesn’t mean they have well-formulated plans to reduce their environmental impact, nor a robust consumer education plan. While other policy options that penalize heavily emitting companies still have a role to play, incentives to reduce emissions and set standards for consumer education may be more politically viable in the immediate future. Several federal carbon tax bills have been introduced in recent years, but action continues to fizzle in Congress despite a Pew Research Center poll estimating 73% of adults in the U.S. support taxing corporations based on their emissions. Tax incentives could reward industry leaders and encourage others to evolve their greenhouse gas reduction, carbon accounting, and customer engagement strategies. Ideally, such an incentive would be the first phase in a multi-year plan leading to mandated requirements.

The uphill effort now is to ensure that carbon footprints and education about them, like the Carbon Catalogue, don’t become a greenwashing trend, and instead become normal parts of doing business. When that happens, compliance will be less onerous to achieve for companies and enforcement will be realistic for state agencies.

Caleb Smith is a 2022 graduate of Columbia University’s MPA in Environmental Science and Policy program and a former intern of the Earth Institute.