In 2021, DEC Forest Rangers conducted 426 search and rescue missions, extinguished wildfires, participated in prescribed fires that served to rejuvenate hundreds of acres of land, and worked on cases that resulted in thousands of tickets or arrests.

“Over the last decade, as well as during the COVID-19 pandemic, DEC saw an increase in people visiting State lands to experience New York’s abundant opportunities for outdoor recreation,” said DEC Commissioner Basil Seggos. “DEC’s Forest Rangers continue to be on the front lines to help visitors get outside responsibly and get home safely, as well as to protect our state’s irreplaceable natural resources. Rangers’ knowledge of first aid, land navigation, and technical rescue techniques are critical to the success of their missions, which for more than a century have taken them from remote wilderness areas with rugged mountain peaks, to white water rivers, and throughout our vast forests statewide.”

Wilderness Rescue: On July 11 at 9:40 p.m., Forest Rangers Arnold and Quinn responded to help two hikers stranded on the East Mill Flow Trail. The 21- and 17-year-olds misjudged the distance from their campsite to Round Pond from Sharp Bridge Campground, and couldn’t find their way back in the dark. The pair from Mineville called 911, but the call dropped before they could share information. At 10:35 p.m., Ranger Quinn located the subjects one mile from the campground. Rangers provided headlamps and helped the hikers back to the campground. Resources were clear at 11:25 p.m.

Water Rescue: On July 11 at 3:40 p.m., Ranger Lunt responded to an angler who had fallen out of his fishing kayak in Labrador Hollow Unique Area. The 49-year-old from Jamesville could not get back into the kayak, became exhausted, and started yelling for help. Someone heard the angler and called 911. The Onondaga County Dive Team launched a small motorboat that struggled in the shallow water, so Ranger Lunt used an inflatable kayak to reach the subject. The motorboat eventually reached the kayaker and Ranger Lunt towed the kayak back to shore. The subject was taken to the hospital by Tully Ambulance Company.

Wildland Fire: On July 12 at 10:30 a.m., Forest Rangers Evans and Piersman responded to a report of a fire in the Sand Flats State Forest. The fire was 3.7 acres in size, burning heavy duff and brushy understory. By 4:50 p.m., Rangers declared the fire in patrol status and determined the cause was an unquenched campfire. The fire was declared out the morning of July 14. DEC continues to urge New Yorkers to practice the utmost safety when building campfires this summer. Dry weather throughout June and July has increased the risk of fires. More information about how to reduce the risk of wildfires can be found at DEC’s website.

Wilderness Rescue: On July 13 at 5 p.m., Ray Brook Dispatch requested Forest Ranger assistance with two lost hikers in the area of Jerry Pond. Hamilton County 911 obtained coordinates. Rangers Temple responded and made voice contact with the couple from Rotterdam at 6 p.m. Ranger Temple reached the two hikers, both in their 70s, approximately 10 minutes later and helped them out of the woods. Resources were clear at 6:45 p.m.

Wilderness Rescue: On July 15 at 11:05 a.m., Ranger Dawson responded to a search for a missing 14-year-old at North-South Lake Campground. Five additional Rangers and additional DEC Operations Staff joined the effort, in addition to New York State Police and Hunter Police. At 5:15 p.m., searchers located the subject in good condition at Kaaterskill Falls Bridge and brought her back to her family at the campground.

Wilderness Rescue: On July 16 at 12 p.m., Forest Rangers Lomnitzer and Sabo responded to a report of a rafting guide who had suffered a heart attack near the Blue Ledges Beach in the Hudson Gorge Wilderness. Another rafting guide gave the 62-year-old from Port Leyden aspirin, and called for help. Ranger Sabo and Johnsburg EMS jogged more than two miles into Blue Ledges to reach the subject and provided him with additional aspirin, which helped prevent cardiac arrest. At 2:06 p.m., Ranger Lomnitzer arrived in a raft and transported the group down the river to EMS responders.

Wilderness Rescue: On July 17 at 10:25 a.m., a group of hikers on Ampersand Mountain called 911 after one of their members suffered an ankle injury. Ranger Curcio reached the 32-year-old from Syracuse at 12 p.m., and splinted the patient’s left ankle. The hiker was unable to put any weight on the injured ankle, and Rangers called for New York State Police Aviation assistance. Ranger DiCintio successfully hoisted the patient into the helicopter for transport to Saranac Lake Hospital. Resources were clear at 6 p.m. 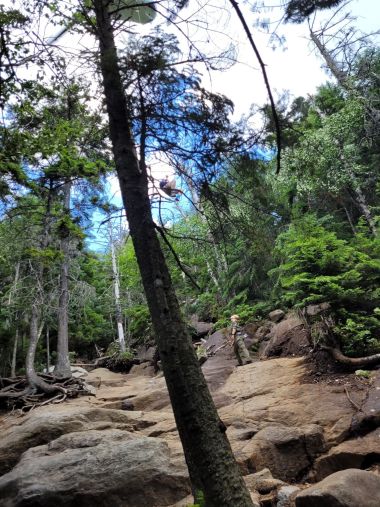 Wilderness Rescue: On July 17 at 3 p.m., Rangers Martin and Sabo responded to a report of a 71-year-old from Massachusetts with a lower leg injury off the Clear Pond Trail. Rangers reached the hiker at 4:18 p.m., and determined she had fallen and hurt her right knee. Rangers helped hike the subject out for transport to Elizabethtown Community Hospital.

Becoming a Forest Ranger: Individuals interested in helping protect people and natural resources throughout the state by becoming a Forest Ranger are reminded that the deadline to apply for the civil service exam is Aug. 3, 2022. The next Civil Service Exam is on Sept. 17, 2022. The deadline to apply is Aug. 3, 2022. More information is available on the DEC website.

If a person needs a Forest Ranger, whether it’s for a search and rescue, to report a wildfire, or to report illegal activity on state lands and easements, they should call 833-NYS-RANGERS. If a person needs urgent assistance, they can call 911. To contact a Forest Ranger for information about a specific location, the DEC website has phone numbers for every Ranger listed by region.

Due to climate change, Nevada says goodbye to grass