Democrats Designed the Climate Law to Be a Game Changer. Here’s How. – The New York Times 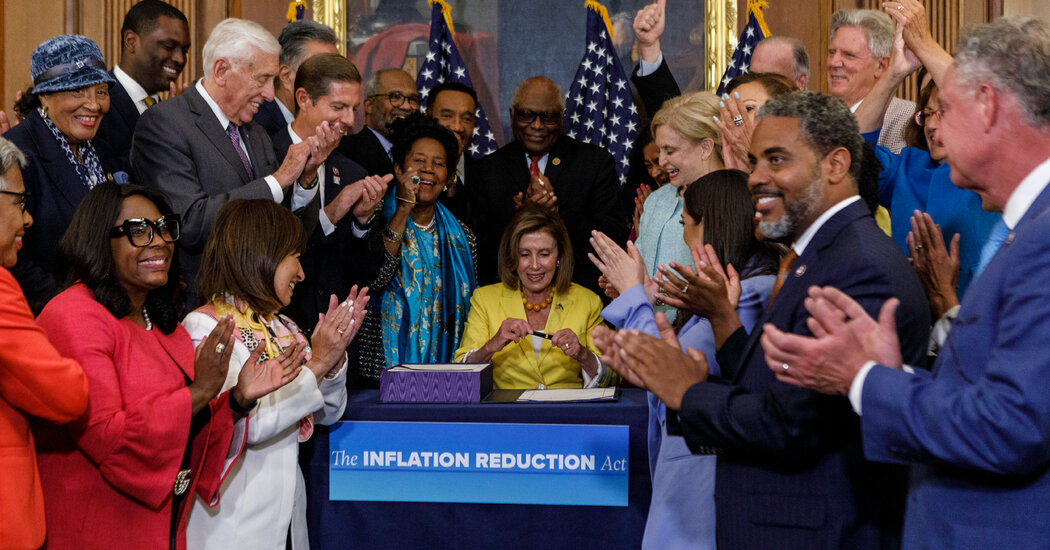 In a first, the measure legally defines greenhouse gases as pollution. That’ll make new regulations much tougher to challenge in court.

When the Supreme Court restricted the ability of the Environmental Protection Agency to fight climate change this year, the reason it gave was that Congress had never granted the agency the broad authority to shift America away from burning fossil fuels.

Throughout the landmark climate law, passed this month, is language written specifically to address the Supreme Court’s justification for reining in the E.P.A., a ruling that was one of the court’s most consequential of the term. The new law amends the Clean Air Act, the country’s bedrock air-quality legislation, to define the carbon dioxide produced by the burning of fossil fuels as an “air pollutant.”

That language, according to legal experts as well as the Democrats who worked it into the legislation, explicitly gives the E.P.A. the authority to regulate greenhouse gases and to use its power to push the adoption of wind, solar and other renewable energy sources.

“The language, we think, makes pretty clear that greenhouse gases are pollutants under the Clean Air Act,” said Senator Tom Carper, the Delaware Democrat who led the movement to revise the law. With the new law, he added, there are “no ifs, ands or buts” that Congress has told federal agencies to tackle carbon dioxide, methane and other heat-trapping emissions from power plants, automobiles and oil wells.

This month, in the hours before the bill passed the Senate, Republicans waged a last-minute, mostly unsuccessful predawn battle to remove the language from the legislation. Later that day, the Senate approved the climate-and-tax bill by a vote of 51 to 50, along party lines, with Vice President Kamala Harris casting the tiebreaking vote.

Republicans objected to the language, and to the fact that it appeared in a budget bill, a category of legislation focused on government spending and revenue.

“It’s buried in there,” Senator Ted Cruz, Republican of Texas, said on Fox Business Network ahead of the Senate vote. “The Democrats are trying to overturn the Supreme Court’s West Virginia vs. E.P.A. victory,” he added, referring to the ruling that curbed the E.P.A.’s ability to tackle global warming. Mr. Cruz did not respond to requests to discuss his opposition.

Conservative organizations that have challenged the Environmental Protection Agency’s authority in the past said the new law would not stop future lawsuits. Robert Henneke, executive director of the Texas Public Policy Foundation, a conservative nonprofit group, said “sneaking in this verbiage” into the new law “is probably just going to set up future regulatory fights.”

Legal experts, on the other hand, said those fights would almost certainly be harder to win.

Jody Freeman, a professor at Harvard Law School and an expert on the Clean Air Act, said the language cemented E.P.A.’s authority and would be “a powerful disincentive” to new lawsuits.

The new law includes about $370 billion over 10 years to expand the use of electric vehicles, jump-start renewable energy such as solar and wind power, and develop newer energy sources like clean hydrogen. It is the largest investment in climate-change solutions in United States history, and it is expected to help cut emissions about 40 percent below 2005 levels by the end of this decade.

That gets close to Mr. Biden’s goal of cutting emissions roughly in half during that time period, but White House officials have said they intend to pursue new regulations through the Environmental Protection Agency to close the gap.

Among other things, the law provides billions of dollars to the E.P.A. to reduce emissions from power plants and helps to fund the development of wind, solar and power sources that don’t emit carbon dioxide. The law also encourages states to adopt California’s aggressive plan to phase out gas-powered vehicles by 2035.

Republican attorneys general and conservative allies in states that rely heavily on fossil fuels are pursuing legal efforts to limit the federal government’s power to cut emissions, in part by challenging the legal doctrine by which Congress has delegated authority to federal agencies to regulate the environment.

Mr. Henneke of the Texas Public Policy Foundation called the billions of dollars in the climate law “a total end run” around the Supreme Court decision limiting the E.P.A. He described it as a continuation of what he called “the war on coal, the war on energy, the war on fossil fuels.”

The Clean Air Act was enacted in 1970, at the birth of the environmental movement, and is the primary law defining the E.P.A.’s responsibilities for protecting and regulating air quality. It was significantly expanded in 1990 to curb other major environmental threats like acid rain and urban smog.

The act does define greenhouse gases in some sections, but does not explicitly direct the Environmental Protection Agency to regulate carbon dioxide. Rather, it more broadly asks the agency to regulate pollutants that “endanger human health.” In 2007, the Supreme Court, in Massachusetts vs. E.P.A., No. 05-1120, ordered the agency to determine whether carbon dioxide fit that description. In 2009, the E.P.A. concluded that it did.

That conclusion meant carbon dioxide could be legally defined as a pollutant and regulated. The Obama and Biden administrations used that finding to justify regulations on gasoline-powered vehicles and coal and gas-burning power plants, and several Supreme Court cases subsequently upheld that authority.

Yet, because Congress had never before directly addressed the issue, challenges have continued. In West Virginia vs. E.P.A., No. 20-1530, the landmark ruling this year, conservative Supreme Court justices made clear that if lawmakers really wanted the government to move away from fossil fuels, they should say so.

“One threshold assumption in the ruling was that Congress had not made it abundantly clear that E.P.A. had a responsibility to address climate pollution from the power sector,” said Vickie Patton, general counsel for the Environmental Defense Fund. “Well, it is now abundantly clear,” she said.

Some experts played down the effect of the provisions. Jeff Holmstead, an energy lawyer who served in the E.P.A. during both Bush administrations, said there was a near-zero chance that legal efforts by some conservative groups to eliminate the government’s ability to regulate climate pollution would have prevailed anyway.

“I don’t think it changes anything,” Mr. Holmstead said of the law’s effect on the Supreme Court ruling. But he called the clean energy incentives in the bill “very significant,” saying, “those tax credits certainly will make it easier for companies to transition away from fossil fuels.”

The E.P.A. didn’t respond to a request for comment on what effect the law might have on agency regulations.

In the hours before the legislation passed the Senate, Republicans fiercely fought the language behind closed doors, according to three Senate aides who were involved in the discussions.

Environmental advocates noted that the language had appeared in an early version of the climate and tax package that passed the House in November. It didn’t change when two Democratic senators, Chuck Schumer of New York and Joe Manchin III of West Virginia, announced in mid-July that they had reached a new deal, which they called the Inflation Reduction Act.

Republicans first tried to persuade the Senate parliamentarian, Elizabeth MacDonough, the nonpartisan referee whose job it was to check the bill against the intricate rules for passing budget bills, that there should be no explicit references to greenhouse gases as pollutants.

Seated around a long table in the ornate Lyndon Baines Johnson Room, just off the Senate floor, on Aug. 3, top Republican and Democratic aides faced off for more than three hours. Ultimately Ms. MacDonough allowed that language and other provisions amending the Clean Air Act to go through.

Later, on the Senate Floor, Senator Shelley Moore Capito, a West Virginia Republican, successfully cut from the package $45 million that she argued would have expanded E.P.A.’s authority and did not meet the complex rules for passing a budget bill. But Democrats and legal experts said the fundamental changes to Clean Air Act and amendments to it remained intact.