Dying in an earthquake: Experts say it’s not just the tremor 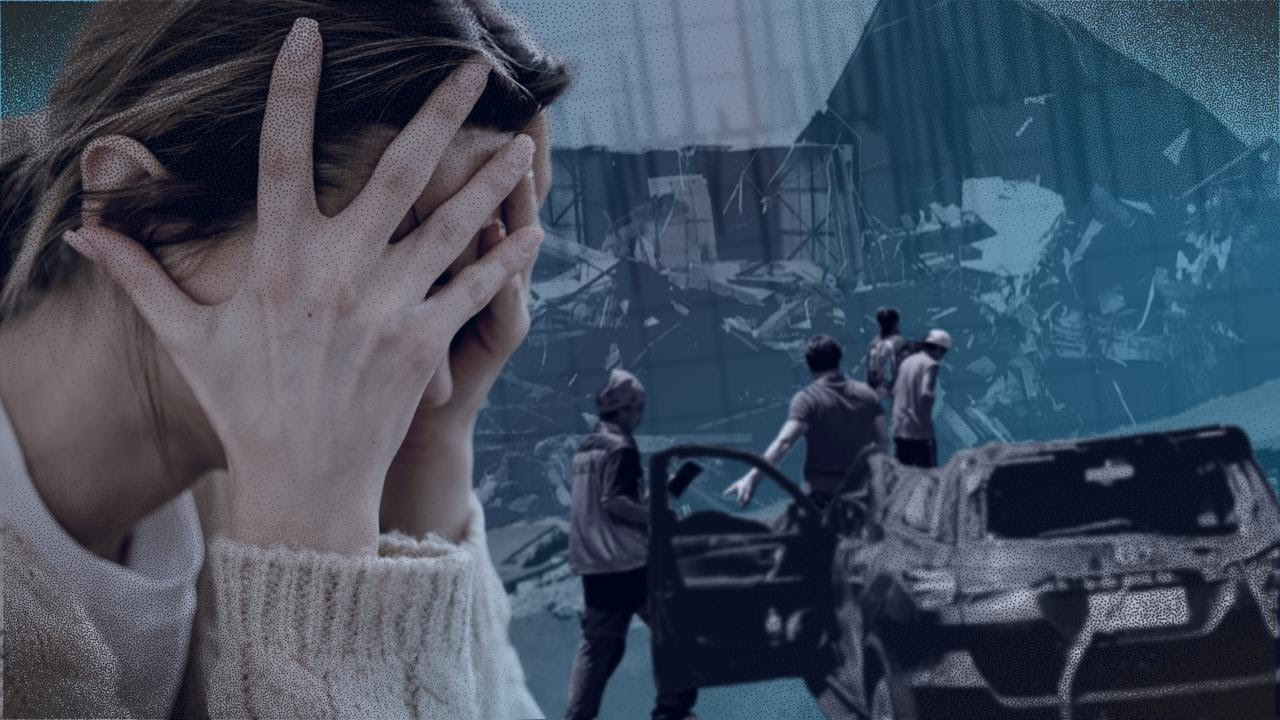 MANILA, Philippines—Earthquakes—which can result in ground shaking, soil liquefaction, landslides, fissures, avalanches, fires, tsunamis, and other destruction—have caused 750,000 deaths globally from 1998 to 2017, according to World Health Organization (WHO).

Earthquakes, which can strike suddenly and without warning, have been described by WHO as “a violent and abrupt shaking of the ground, caused by movement between tectonic plates along a fault line in the earth’s crust.”

WHO said deaths caused by earthquakes in the past decade accounted for nearly 60 percent of all disaster-related mortality worldwide. 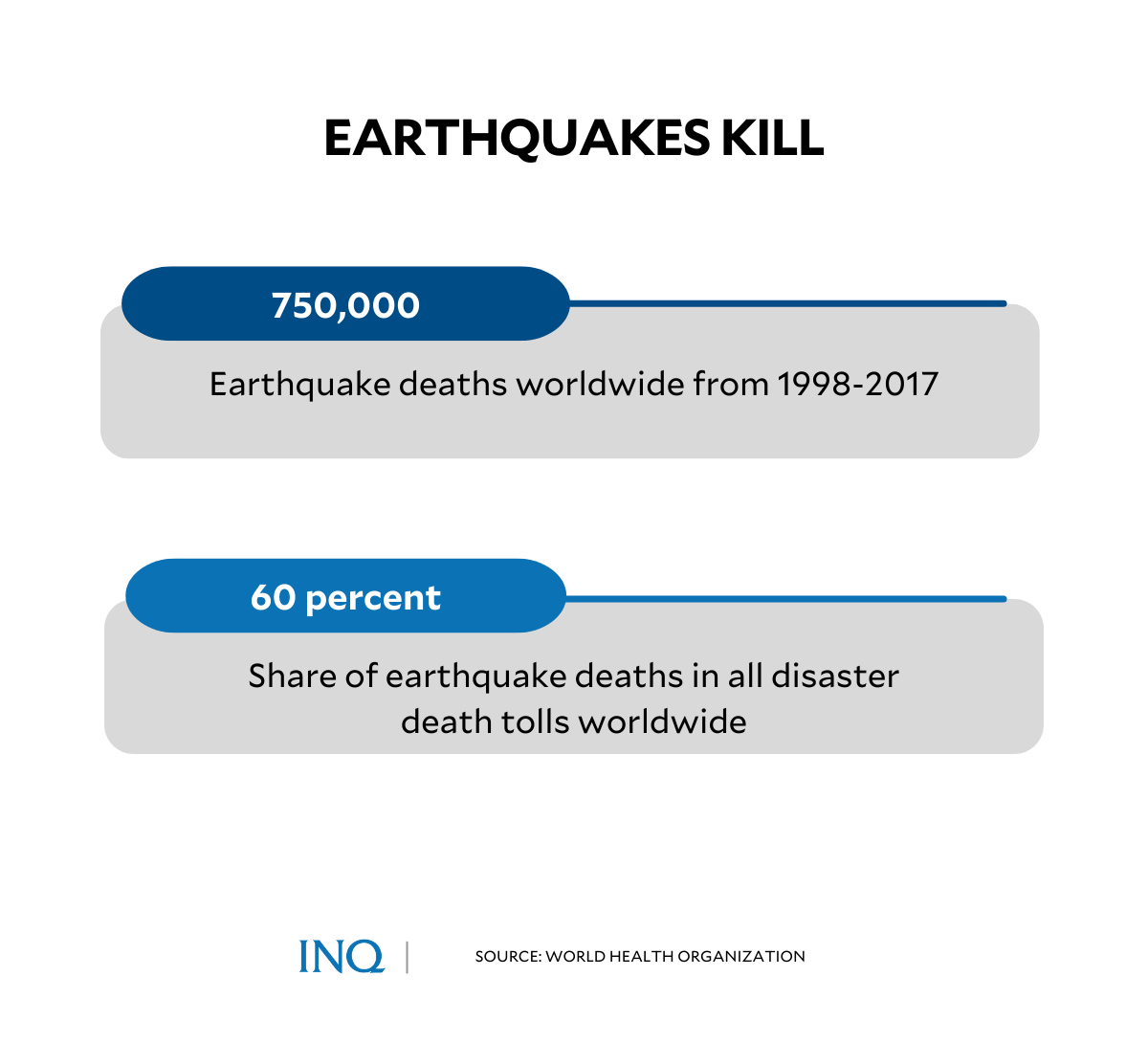 While the extent of destruction and harm caused by an earthquake depends on factors such as magnitude, intensity and duration, and many more, data showed that aside from deaths, the natural disaster affected 125 million people across the globe between 1998 and 2017.

This means that the affected individuals were “injured, made homeless, displaced or evacuated during the emergency phase of the disaster.”

Ten of the strongest earthquakes that hit the Philippines in the past years—with magnitudes ranging from 6.1 to 7.8—have killed over 11,000 people—the deadliest of which was the 1976 Moro Gulf earthquake and tsunami that killed 8,000 individuals.

Studies have shown, however, that ground vibrations during earthquakes are rarely the direct cause of deaths or injuries. Most earthquake-related mortality and injuries result from collapsing walls, flying glass, and falling objects caused by the shaking of the ground.

Some studies have also found that certain medical conditions and the risk of disease outbreak after an earthquake can lead to an increase in death toll or injuries.

Reports of earthquake-related death and injury ratios vary. However, many studies have previously pointed out that the ratio is approximately 1:3, with many victims dying immediately.

Several studies—based on medical records following different earthquakes across the globe—found that most cases of death in earthquakes were due to building damage, including the structural collapse of buildings and infrastructure and debris falling from damaged buildings.

“Building damage is a major cause of death and injury in earthquakes, especially where solid building materials such as concrete are used, and buildings are not adapted to withstand ground motion,” researchers Sodia Bartholdson and Johan von Schreeb wrote in a study titled “Natural Disasters and Injuries: What Does a Surgeon Need to Know?”

Injuries from infrastructure damage—caused by earthquakes—which ultimately result in death are mainly crush and other traumatic injuries. 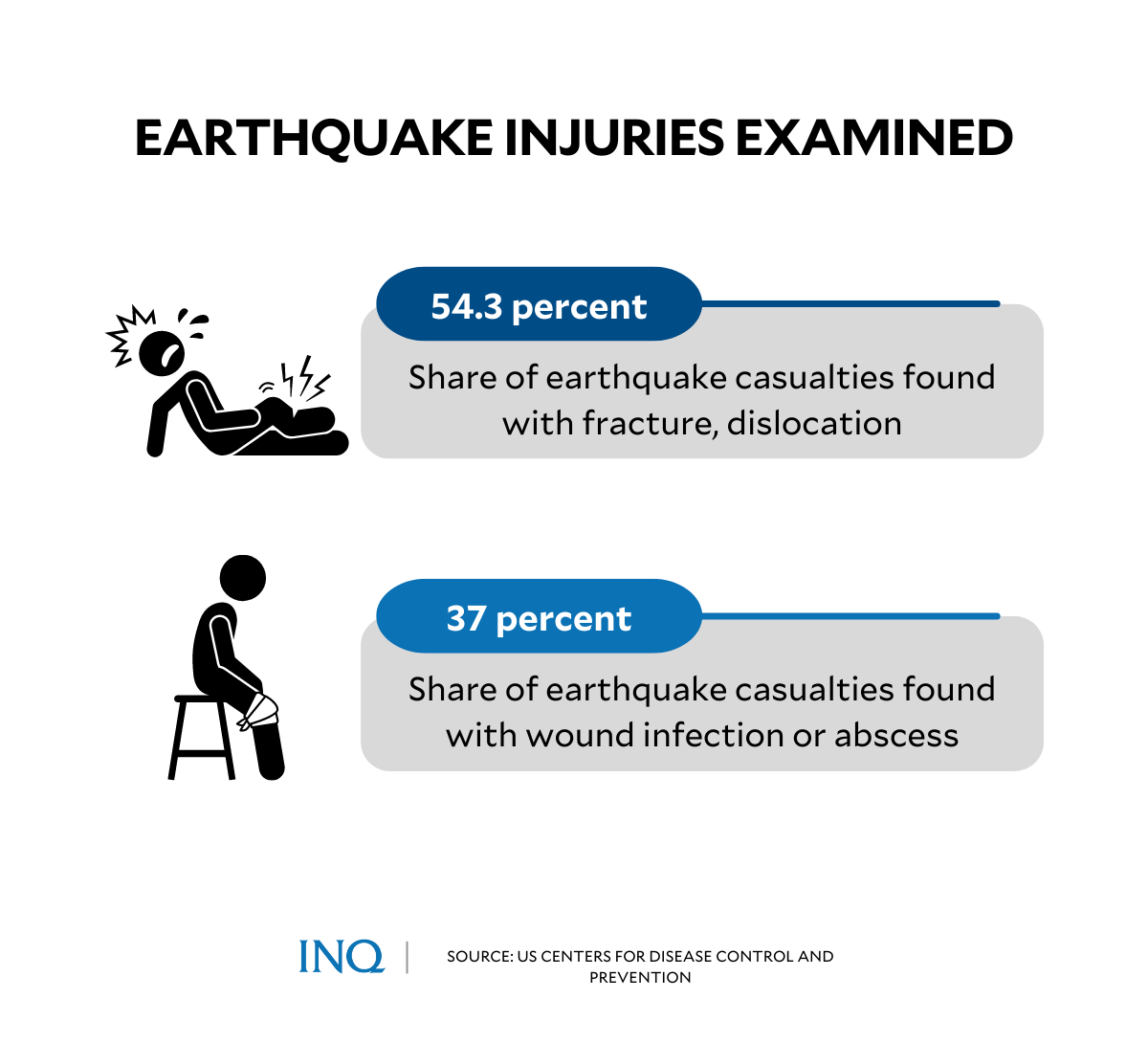 Crush injury is defined by Encyclopedia Britannica as “any of the effects of compression of the body, as caused by collapsing buildings, mine disasters, earthquakes, and cave-ins.”

Following findings from various studies on earthquake-related deaths, Encyclopedia Britannica also stated that crush victims—especially those with severe injuries to the chest and abdomen—usually die before help arrives.

“Injuries to the extremities may not appear immediately serious, though latent symptoms frequently arise.”

Bartholdson and Schreeb also found that the time of onset influences the death toll.

“Earthquakes cause infrastructural damage, damage to health facilities, and disruption of transportation. This might cause traffic injuries and death, but also restrict rescue efforts and increase the vulnerability of the affected population,” the researchers said.

Meanwhile, among the most common causes of earthquake-related mortality—including instant deaths—are severe trauma with head injury, asphyxiation or lack of oxygen, and shock.

During the 1999 earthquake in Taiwan, 30 percent of people reportedly died due to head injuries.

According to Bourque and co-researchers, an “overwhelming majority” of earthquake-related health problems recorded globally are injuries—specifically, “soft tissue and orthopedic injuries caused by falls and being struck by nonstructural elements (e.g., furniture, ornaments, light ﬁxtures).”

They noted that the majority of these injuries are considered minor and do not require hospital admission.

The study analyzed 74 research articles about earthquake-related injuries from China as well as from other countries that were published over the past 50 years.

Out of the total earthquake-related injuries they tallied from the 74 research articles, fractures were the most common, accounting for 48.47 percent.

Other earthquake-induced injuries that were also noted: “range from mild cuts and bruises to more serious conditions such as severe fractures, internal organ damage, crush syndrome, and burns.”

Burn injuries during earthquakes, Bartholdson and Schreeb noted, are relatively rare. However, it is common when earthquakes occur in rural areas of low- and middle-income countries, “where basic cooking methods and heating is used.” 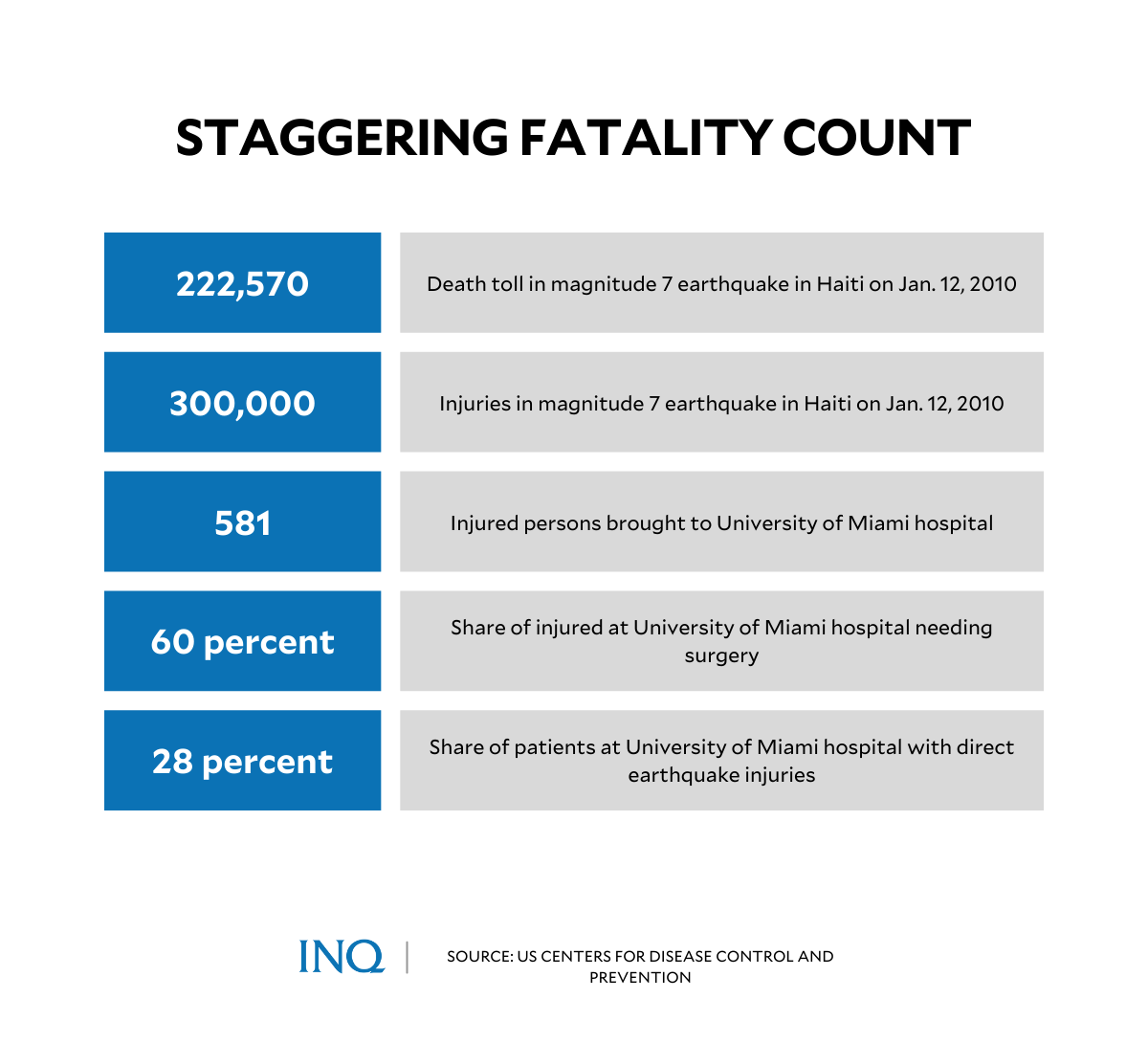 Following the 7.0-magnitude earthquake that struck Haiti on January 12, 2010, the US Centers for Disease Control and Prevention (CDC) published a report on the post-earthquake injuries that were treated at a field hospital.

The earthquake killed 222,570 people and injured 300,000, based on records from January 13 to May 28. A total of 1,369 individuals were admitted to The University of Miami Global Institute/Project Medishare (UMGI/PM).

Out of the total admissions, 581 or 42 percent have had injury-related diagnoses, of whom 346 or 60 percent required a surgical procedure. However, only 162—28 percent—were identified as earthquake-related injuries.

“Earthquake-related injuries were defined as diagnoses for which the medical record 1) documented the date of injury as January 12, 2010, 2) recorded in the medical history that the injury was related to the earthquake, or 3) described a mechanism reasonably consistent with an earthquake-caused injury,” the report explained.

Data showed that the most common diagnoses for earthquake-related injured patients were fracture or dislocation and wound infection or abscess—accounting for 88 cases (54.3 percent) and 60 cases (37 percent), respectively.

The CDC report emphasized that a patient might have had more than one diagnosis.

The report also recorded the different mechanisms of injury (MOI) or the manner in which a physical injury occurred.

Among earthquake-related injury patients, the majority of the injuries had an unknown injury mechanism. Meanwhile, most of the patients experienced cuts and pierced or struck their skin or organs.

Many patients who sustained earthquake-related injuries had to undergo one or more surgical procedures. Most of them underwent skin graft, incision and drainage, plastic surgery, and wound debridement.

Earthquake-related casualties, based on one study, are divided into two types: direct and indirect.

“Injuries that occur during the earthquake, such as falls, are direct effects of the physical force of the earthquake. But an injury that occurs because of structural collapse can be either direct or indirect,” one study explained.

“If it happens during an earthquake, it is direct; if it happens 24 hours
later, it usually is considered indirect.”

In July 1990, when the massive 7.7-magnitude earthquake struck Luzon Island, a large portion of Luzon was affected—with Baguio City suffering the most devastating effects.

“Heroic rescue efforts saved many, but some victims who did not die in the collapse were found dead later from dehydration because they were not pulled out in time,” she added.

Petra Rattue of Medical News Today also detailed that earthquake victims with serious injuries such as liver or spleen lacerations, pelvic fractures, and subdural hematomas succumb to their injuries a few hours after the quake.

These deaths, Rattue explained, are considered among the second mortality peak—or deaths recorded after the initial death toll.

The third peak occurs within days to weeks following an earthquake, as people with sepsis and multi-organ failure die of their injuries.

“Those suffering from chronic diseases, such as diabetes and heart conditions, are also subjected to a higher death risk as crucial medicines and care is being cut off,” said Rattue.

Around 2 to 15 percent of the population can suffer crush injuries from heavy loads crushing their bodies as a result of earthquakes. About half of these victims, according to previous research, may develop kidney failure, and half of these will need dialysis.

Data showed that the death toll for people with kidney failure in earthquake settings ranges from 14 to 18 percent.

Earthquakes, studies noted, can also cause environmental pollution that can affect the health of many people.

One study cited the 1994 Northridge earthquake in the US, wherein active surveillance in Ventura County documented increased cases of coccidioidomycosis, an infectious disease known as “valley fever.”

“Dust clouds, raised by aftershocks and landslides after the 1994 Northridge earthquake, led to an outbreak of an unusual lung infection that caused three deaths,” a 1997 Washington Post report narrated.

The infection had no symptoms, but some victims developed fatigue, cough, night sweats, and fever.

“Other health emergencies, such as overcrowding in makeshift shelters, can lead to epidemic outbreaks of infectious diseases as people are being displaced from their homes after the initial earthquake response has subsided,” said Rattue.

Aside from indirect casualties and epidemic outbreaks, earthquakes can also cause post-traumatic stress and mental health problems.

“The present study indicates that injury to the self or to the loved ones, damage to home or property, or the loss of family members as a result of the earthquake enhances the suicidal tendencies,” the researchers stated.

Don’t miss out on the latest news and information.