“DEC Environmental Conservation Police Officers and Investigators are on the front lines each and every day protecting our natural resources by upholding New York’s environmental laws and regulations and safeguarding public health,” DEC Commissioner Basil Seggos said. “From ensuring hunters and anglers follow rules and regulations afield and on the water, to sustaining partnerships with local law enforcement agencies investigating crimes that include solid waste dumping and air emissions violations, ECOs and Investigators are on patrol, ready to serve their communities. Each year brings new challenges, and fortunately, these Officers and Investigators are expertly trained to perform their duties with persistence, integrity, and good judgment, as they’ve done for over a century.”

A Diamond in the Pool – Nassau County
On July 1, ECO Dickson received a call from DEC dispatch reporting a resident with an unidentified turtle swimming in their pool. Officer Dickson responded, met with the homeowner, and found a native Northern diamondback terrapin unable to climb the pool stairs or ladder to escape. He grabbed his net and removed the turtle from the pool before safely relocating it to a marsh at a nearby park. 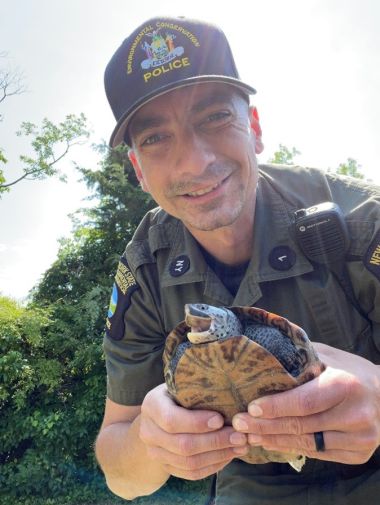 Jones Beach Firework Show – Nassau County
On July 4, ECOs in Nassau County assisted New York State Police and State Park Police in providing security for the annual Jones Beach July 4th fireworks show. The event drew thousands of people from across the area. ECOs on quads joined their law enforcement partners in responding to a variety of calls throughout the day, including missing children, unpermitted activities in a State Park, and individuals causing a disturbance. On the water, ECOs monitored hundreds of vessels in the area for the fireworks display. No major issues were reported. 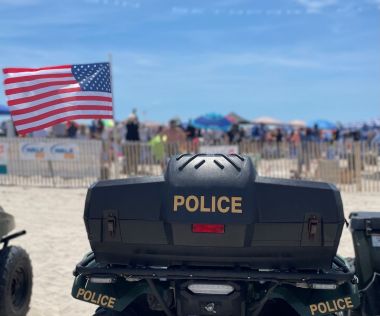 Firework Display Sparks BWI Enforcement – Orange County
ECOs assisted the Village of Greenwood Lake Police Department in an ‘Operation Dry Water’ initiative. This national campaign is designed to reduce the number of alcohol- and drug-related incidents and fatalities by ensuring boaters are not under the influence. Every year, Greenwood Lake hosts a firework display for the July 4th holiday, which attracts many boaters. In addition to checking for drunk boaters and providing security, ECOs inspected boats for proper safety equipment. More than 150 vessels, and an estimated 500 boaters, attended the three-day weekend celebration. 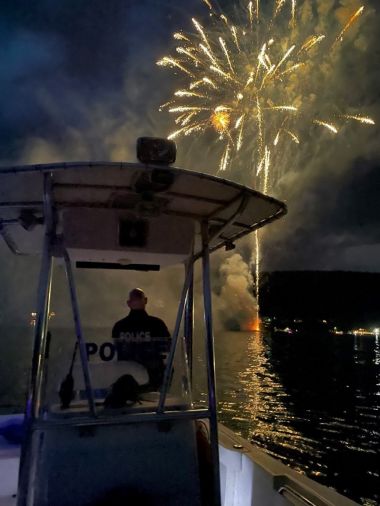 Stubborn Off-Roader – Nassau County
On July 4, while on foot patrol at Alder Island in the town of Hempstead, ECO Pabes observed two vehicles illegally off-roading on a tidal wetland. Many tidal wetlands are protected from human activities. Officer Pabes informed the drivers that they were not permitted to off-road and directed them to leave immediately. Both drivers stated they would comply. ECO Pabes returned to his patrol vehicle further up the dirt trail to move it and enable the vehicles to leave. Once he moved his vehicle, the Officer observed only one vehicle exit the wetland and saw the second driver off-roading deeper into the wetland and strike a tree. The driver then exited his vehicle and started offloading supplies. Officer Pabes issued the driver a summons for conducting regulated activity on a tidal wetland without a permit. 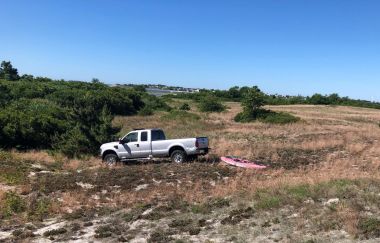 Vehicle discovered on tidal wetland after being directed to leave 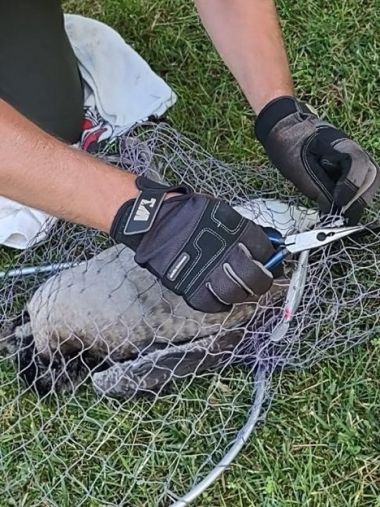 Raccoons Rescued – Suffolk County
On July 6, ECO DeRose received a request to help a woman reporting a sick raccoon in her backyard. Officer DeRose responded to the home and discovered two juvenile raccoons that appeared to be undernourished. He canvassed the surrounding area in search of the mother but could not find her. The house is on a main road and ECO DeRose presumed the young raccoons were orphaned. The Officer crated and transported the animals to a local wildlife rehabilitator certified to accept raccoons where they will be cared for until they are self-sufficient. 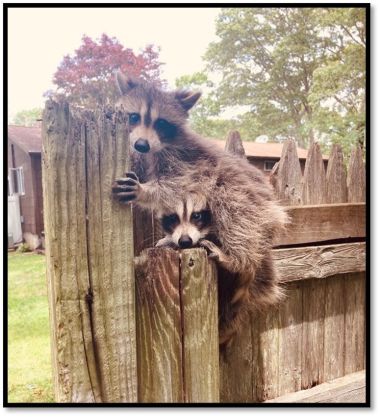 Killdeer Down the Drain – Suffolk County
On July 6, ECO DeRose received a call from a woman at a school playground with her children when she heard what sounded like a bird chirping in a drain. Officer DeRose responded and discovered an old access hole in the ground covered by welded steel plates. The steel diamond plate had two small holes, allowing a small killdeer fledgling to enter and become trapped. Unable to remove the welded plates, ECO DeRose used his catch pole to carefully grab onto the fledgling and slowly remove it from the hole. The Officer reunited the bird with its mother nearby as she closely monitored the activity. Officer DeRose was sure to cover the holes in the plates with large stones before leaving the area. 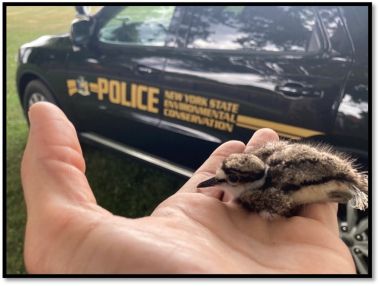 A Rattling in the Middle of the Night – Delaware County
On July 6 at approximately 3 a.m., ECO Osborne responded to a complaint of a rattlesnake in a residence in the town of Hancock. The caller reported he woke in the middle of the night to his dog barking in the living room. When he went to investigate, the man spotted a 3.5-foot timber rattlesnake on the living room floor and called for help. ECO Osborne captured the rattlesnake and released it back into the wild far from any homes. Although they are not seen very often, timber rattlesnakes are native to New York State and they are venomous. Timber rattlesnakes are generally found in small, localized areas, and are considered a threatened species protected by law. For more information visit DEC’s website. 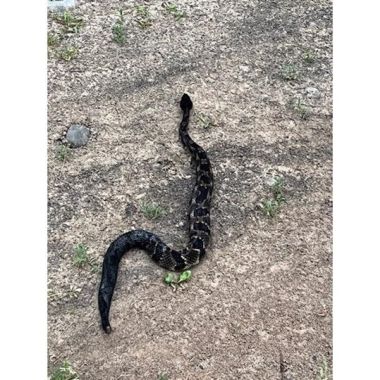 Pesticides Stop – Westchester County
On July 6 while patrolling Mount Vernon for pesticide violations, ECO Franz observed an individual operating an unregistered pesticide business. While investigating the contents of the truck, Officer Franz discovered several unlabeled pesticide containers and an insecticide stored in a water bottle. The ECO issued summonses to the owner of the company and explained the safety risks of the improper storage and application of pesticides. ECO Franz also directed the owner to complete the process of registering the business. 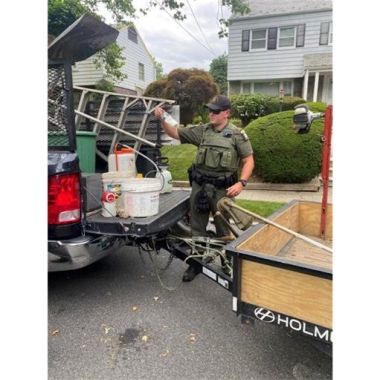 Illegal Poaching Bust – Queens County
From July 13 to 17, ECOs Milliron, Michalet, and McCarthy apprehended large groups of poachers illegally taking shellfish from Jamaica Bay. On multiple days, ECOs responded to dozens of complaints of people taking bags and buckets of mussels, hard clams, razor clams, and soft clams. Jamaica Bay is closed for harvesting shellfish due to water quality. Along with the potential health risks of consuming shellfish from the bay, clams serve an important ecological purpose especially in the estuary surrounding New York City. The Officers issued 23 tickets for taking shellfish from uncertified waters, dumping upon signal to stop (misdemeanor), possession of untagged shellfish, and pollution of the waters of the Marine District. A total of 3,806 illegally harvested clams were returned to the waters of Jamaica Bay before they could be potentially consumed or illegally sold. The penalties for illegally harvesting shellfish in New York State range from a $250 to $1,000 fine, and the value of the shellfish illegally taken can be added to the fine. 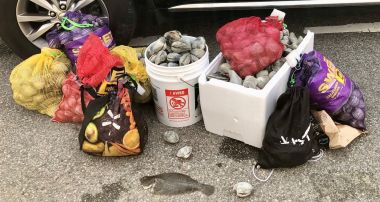 Coyote Pup Rescue – Otsego County
On July 15, ECO Burgess responded to the Schenevus Fairgrounds where fair goers reported a coyote pup by the fireworks tent. Officer Burgess used her catch pole to secure the animal and with the assistance of the Schenevus Fire Department, got the pup into a box. They relocated the pup away from the fairgrounds and back into the wild. Coyotes are shy by nature but can be active during daylight hours. For video of the rescue visit DEC’s website. 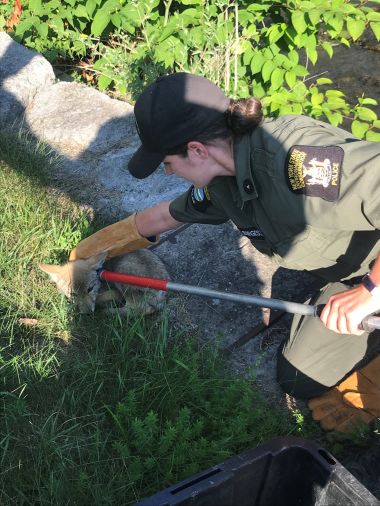 Too Tangled to Swim – Lewis County
On July 14, ECOs received reports of a loon on Lake Bonaparte that appeared to have fishing line and a possible lure tangled in its legs and body, restricting its ability to swim or dive. ECO Worden responded to the location and spotted the loon along the opposite shoreline. The caller volunteered to take Officer Worden on his boat to the loon’s location and they discovered it bound with a crank bait and several feet of braided fishing line tangled. ECO Worden successfully removed the lure and line from the loon and released it back to the lake. 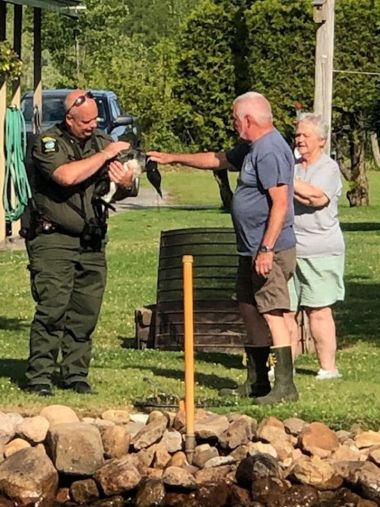 I FISH NY -Bronx County
On July 16, ECO Milliron and Lieutenant Unger attended an “I Fish NY” event at SUNY Maritime College in Bronx County to introduce children to fishing. The Officers assisted with tangled gear, baiting hooks, and shared tips on catching fish. The lessons paid off as many first-time anglers caught porgies and striped bass. 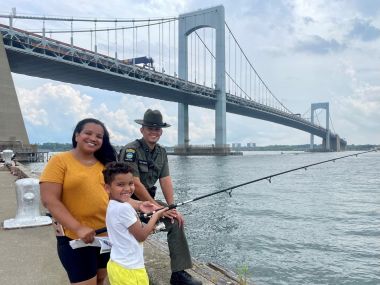 Spaghetti sauce is under threat as water crisis slams tomatoes