These figures reveal the severity of the ocean crisis, and the scale of action required to protect them, and are from Greenpeace analysis of the International Union for Conservation of Nature (IUCN) red list. They come as governments prepare for the fifth, and possibly final round of UN negotiations towards a Global Ocean Treaty, set to take place in New York from August 15-26.

Laura Meller, of Greenpeace’s Protect the Oceans campaign says: ‘While governments have spent the last two decades talking, the ocean crisis has deepened. We’re losing habitats and biodiversity at an unprecedented rate. 118 marine species have been pushed to the brink of extinction, and without an urgent change in course, many well be lost forever.

‘This shocking figure reveals the cost of political inaction and continued delays in agreeing a new Global Ocean Treaty, which could allow the creation of ocean sanctuaries across our blue planet,’ she adds. 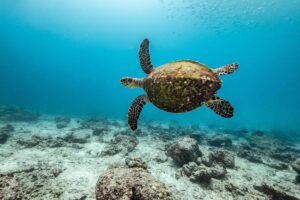 The Critically Endangered Hawksbill Turtle has been hunted for thousands of years and also suffer from threats such as fishing and climate change.  Protected Areas would help the recovery of this species. Credit: Tommy Trenchard/Greenpeace

Although some of the least explored areas on Earth, the oceans are rich and diverse natural environments which provide critical support for our planet. They are the planet’s greatest carbon sink, and therefore vital in our fight against climate change. In addition to generating 50% of the oxygen we need, and absorbing 25% of the atmospheric carbon dioxide emitted by human activities, they also capture 90% of the excess heat generated from rising greenhouse gas emissions.

Two thirds of the world’s oceans, and almost half of the Earth’s surface, lie outside of any country’s jurisdiction. This region of the global ocean is commonly known as the ‘High Seas’. Although a huge part of our planet, only one percent of the High Seas is currently protected, even though it includes some of the most biologically important, but threatened ecosystems in the world The rest  is under threat from factors such as climate change, acidification, plastics and other pollution, and exploitation such as fishing, still one of the most severe threats to ocean biodiversity, and the emerging deep seabed mining industry.

Greenpeace, along with over 40 other non- government organisations, and the IUCN, are members of the High Seas Alliance (HSA), which is focused on facilitating the international cooperation for the protection and sustainable use of the high seas.

Many species associated with this region of the global ocean have dramatically declined in number over the past few decades- six of the seven marine turtle species are threatened with extinction, oceanic shark populations have dropped by over 70% since 1970, and the albatross, the world’s most threatened family of birds, has 17 of its 22 species ‘Threatened with extinction’, with the remaining five considered to be ‘Near- threatened’. The world’s most endangered Tuna, the Pacific bluefin, has collapsed to less than three percent of its historic abundance, but continues to be fished. 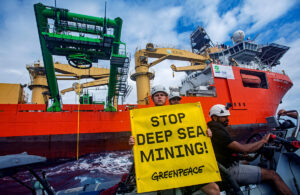 But, according to Dr Chris Tuckett, Director of Programmes at the Marine Conservation Society, many of these species would benefit immensely if their habitats were to be protected.

‘Marine Protected Areas are vital for biodiversity and climate. When protected from human activity, our ocean has an incredible ability to recover and thrive. With healthy habitats that provide food and shelter, populations of marine wildlife can bounce back,’ Dr Tuckett says.

‘And by protecting whole areas of our ocean we can also ensure that carbon remains locked into the seabed – vital for combating the climate crisis,’ he explains.

Although government discussions began in 2002, negotiations for a new international treaty only began in earnest near the end of 2018. Formally referred to as the Biodiversity Beyond National Jurisdiction treaty, the Global Ocean Treaty, aims to create a planet-wide network of Marine Protected Areas (MPAs), protecting at least 30% of the world’s oceans by 2030, the minimum scientists say is needed to ensure the health and biodiversity of vital marine habitats, to allow recovery from centuries of harmful human activities, and help combat the effects of climate change, in addition to ensuring the oceans continue to provide livelihoods and sustenance to billions of people.

Marine Protected Areas require a long term commitment and work best when fully protected from exploitation and other sources of harm, but research  has shown the need for this protection is immediate, and the proposals to create an ocean wide network of MPA to be entirely feasible- all that is needed is the political will.

The fourth round of UN discussions on the Global Ocean Treaty, in March, like the ones before them, failed to make agreement. The outcome of the negotiations next week is extremely important, and will determine the future health of our oceans. A strong Global Ocean Treaty would provide a mechanism which would make protecting large areas of the high seas possible. Without a treaty there is no legal mechanism to create Marine Protected Areas in international waters, and therefore no possibility of protecting 30% of the world’s oceans by 2030.

Duncan Currie, International Lawyer who specialises in the High Seas says: ‘The continuing delays in concluding these negotiations reflects a disappointing lack of ambition by States in taking the necessary strong steps to protect the ocean when the status quo has shown itself to be so wanting.

‘It is essential that the agreement be concluded this session and is ratified and enters into force in a matter of months rather than years, as the ocean continues to be degraded through climate change, ocean acidification, plastic pollution, overfishing and noise. Scientists continue to tell us that marine protected areas are an effective tool to protect the ocean against these and other stressors, and they cannot be implemented for most of the high seas under current international law.’