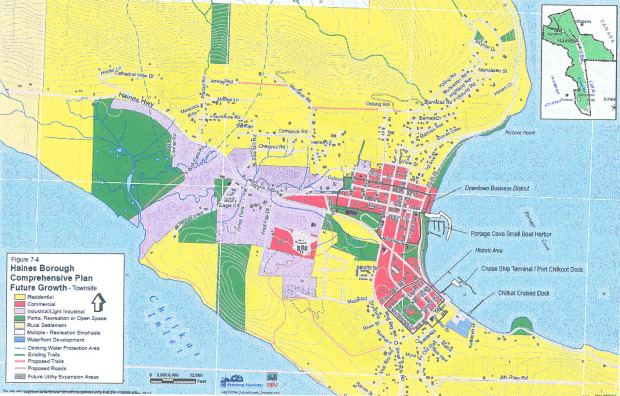 The Department of Natural Resources held a meeting in Haines this week to discuss land swap options for those affected by the Beach Road Landslide from 2020, a major subdivision’s progress continues, and voters head to the polls on Tuesday. KHNS’ Mike Swasey spoke with Borough Manager Annette Kreitzer for the latest from Haines.

Swasey – Haines borough manager Annette Kreitzer thank you for joining us today. We’ve got lots to talk about in Haines including the Hilltop Subdivision, what’s the latest development on that building project?

Kreitzer – So the Hilltop Subdivision is a new subdivision and one that is probably the largest that we’ve had in a while. (It’s) 65 lots that are going to be really close to the town site. So if people are working in the town site, they could be within walking distance. On Thursday night, the Planning Commission approved the final preliminary plat which will allow and actually require the developer to begin construction of streets and water and sewer and do the surveying and monumentation. So it’s, it’s a big step forward. We haven’t had a subdivision approved in a while.

Swasey – And any idea as to when these pieces of property will be coming up for sale?

Kreitzer – No, it’ll be a process for the developer to go in and do all the work that’s required. But as soon as we have an update, we’ll be sure to let you know.

Swasey – Moving on, DNR (Department of Natural Resources) came in and talked about some land swap options for Beach Road residents who lost property during the big landslide in 2020. What kind of options are there?

Kreitzer – Well, they’re stymied by the current statutes. There are a lot of criteria here, there has to have been a residence or commercial improvement on the property, a vacant lot will not qualify for a land swap. There isn’t any land in the borough, state land in the borough, for DNR to be able to swap. So if you were affected by the landslide, you’re going to be looking at land in Prince of Wales and up north.

Some of the land we’ve looked at is in unpopulated areas, and some is in, you know, some populated areas, but it’s fairly scattered and definitely not near Haines borough. Once they do a preliminary determination, that’s expected in between 30 and 60 days, once they do that, then the clock starts for the applicants to apply, though. And that’s what people need to know, that applicants will then have 30 days to apply for a land swap.

Swasey – And then they would be able to own that new piece of property outright and then could sell that and try and buy something in Haines if they wanted to stay.

Swasey – And finally, we’ve got a statewide election coming up on Tuesday. It’s a primary election, but it’s a two sided ballot. So can you kind of just help me understand better what the two ballots are about?

Kreitzer – Sure, and it’s interesting because there’s been a bit of confusion about whether or not there’s Ranked Choice Voting in this election. And there is on one side of the ballot because remember, we’re electing someone to fill out the rest of former Congressman Don Young’s term. So this person would serve once the election is certified until the end of his term, January 3, 2023. So this is just that temporary filling of the position. And that is a rank choice voting procedure. And so you’ll see there the names of Mary Peltola, Nick Begich, Sarah Palin, and a space for a write-in but you must rank those.

On the other side of the ballot. You have the primary election. This is what you would normally expect for a primary. You’re voting for your State Representative, your State Senator, your Governor, Lieutenant Governor, your United States Representative, and your United States Senator. And we are doing absentee in-person voting here at the administration building on Monday. But then voting on Tuesday, folks have to go to their normal places of voting, which will be the ANB Hall or Klehini Fire Hall.

Swasey – Haines Borough Manager Annette Kreitzer thank you for joining us today and filling us in on the latest in Haines.

Trees get overheated in a warmer rainforest — ScienceDaily