Euro Manganese (EMN), a Canada-based company developing the Chvaletice Manganese Project in the Czech Republic (earlier post), released the results from a Life Cycle Assessment (LCA) study comparing the global warming potential (GWP) of EMN’s high-purity manganese products from the Chvaletice Project with those produced by the incumbent industry in China—where currently 95% of global high-purity manganese products are processed.

Euro Manganese engaged Minviro, a UK-based and globally recognized sustainability and life cycle assessment consultancy, and RCS Global, a global auditor of battery material supply chains, to conduct a cradle-to-gate study to evaluate the GWP of high-purity electrolytic manganese metal (HPEMM) and high-purity manganese sulphate monohydrate (HPMSM) produced at the Chvaletice Project and by the incumbent industry in China.

Data analyzed was from public sources for different operational manganese plants in the country. GWP processing routes using both grid-mix electricity and renewable electricity were evaluated in-line with LCA best-practice and Global Battery Alliance requirements for the battery passport.

Highlights of the results include: 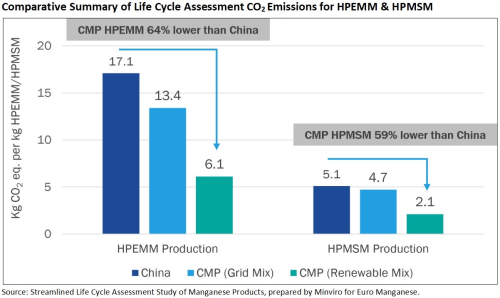 The LCA covered Scope 1 direct Greenhouse Gas emissions; Scope 2 indirect GHG emissions from imported energy (electricity, heat or steam); and Scope 3 other indirect emissions. The study excluded the transport of reagents for comparative purposes; as such, Scope 3 and total GWP figures for the CMP are slightly lower in this study than those detailed in an LCA Study conducted earlier this year. 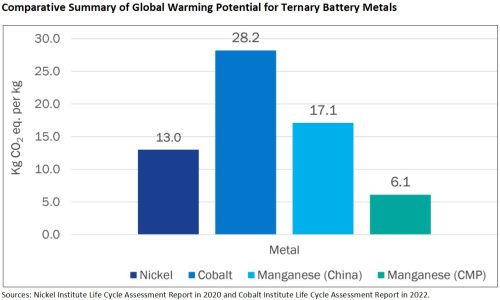 Additional analysis of the GWP for different cathode metals shows that Chvaletice manganese has the lowest kg CO– eq. per kg of metal when compared against the Nickel Institute LCA and Cobalt Institute LCA.

The results of this comparative Life Cycle Assessment confirm that high-purity manganese products from the Chvaletice Project are shown to have a significantly lower carbon footprint than the incumbent industry. These results are also lower than other manganese projects that have recently published Life Cycle Assessment results. Equally, when benchmarked against the carbon footprint of nickel and cobalt, the other battery cathode metals, manganese from Chvaletice also compares very favorably. This further supports the move to high-manganese cathode chemistries, with manganese being the most affordable and green battery metal.

With automotive manufacturers increasingly using strategic procurement to meet their targets of lower carbon emissions, and as we progress offtake discussions, the results of this comparative Life Cycle Assessment are extremely beneficial and very timely.