Damaging winds, heavy rainfall and flash flooding is expected for people in the Hunter, Illawarra and central tablelands districts from Saturday afternoon until early Sunday morning.

The weather bureau has issued a severe weather warning for the NSW regions, as weather conditions across the state are expected to deteriorate with heavy rain, storms and dangerous flash flooding likely in the next 24 hours.

North-western NSW and south-western Queensland have also been warned a severe thunderstorm with damaging winds, large hailstones and heavy rainfall is likely.

The Bureau of Meteorology (BoM) is also warning towns along the western NSW-Queensland border to prepare for the thunderstorm to develop within the next few hours.

Wet weather has also caused havoc across Melbourne, shutting down roads, submerging cars and caving in roofs, as severe thunderstorms moved across the state.

Sydneysiders had a brief reprieve from ﻿heavy downpours as more roads have reopened that were closed yesterday due to flooding.

Drivers are reminded to take extra care around floodwaters and to check traffic information here.

NSW Emergency Services Minister Steph Cooke said the state is “in the middle of two wet weather systems at present”.

A trough and a cold front is sitting over much of NSW and is also expected to bring wet weather to Queensland and Victoria, which are also bracing for storms and potential flooding.

“Over the next 24-36 hours we are likely to see increased rainfall across southern inland places like Bathurst and also across Sydney,” Cooke said today.

“We are expecting weather conditions to deteriorate over this time and on that basis, we’re asking communities to work with us.”

The minster then made particular reference to communities along the Hawkesbury and Nepean rivers.

The BoM this morning upgraded its flood advice for the two waterways from minor to moderate flooding. ﻿

“We are conscious of the fact that your communities have experienced four floods within an 18-month period and acknowledge the anxiety some of you will be feeling,” Cooke said.

“The SES are very well prepared … we have prepositioned resources right across NSW.”

Those travelling to the Bathurst 1000 have also been issued a harsh reminder as the wet weather lingers.

“If you go into floodwaters what you’re doing is not only putting your life and your passengers lives at risk, you’re also putting the lives of our emergency service personnel at risk as well. 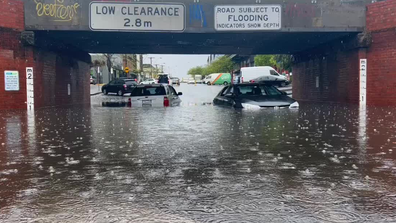 Cars stranded in floodwaters after heavy rainfall in Melbourne

He urged campers to not pitch a tent near riverways or camp underneath trees and warned of congestion along the Great Western Highway, Princes Highway and the M1 Motorway.

“Plan your trips, take your time,” he said.

“Drive to conditions – there will be wet weather.”﻿

Much of NSW is on flood watch today with the SES issuing 58 flood warnings across the state – stretching from the far north to the Victoria border.

“The areas of impact and concern are Gunnedah, Bathurst, Forbes, Warren and most of inland NSW,” SES Superintendent Josh Clark said.

“﻿Thankfully at the moment we’ve only had 365 requests for assistance in the last 24 hours across NSW, of note, four of those have been flood recues.

“Again the message is really clear from emergency services: please, if the road is flooded, forget it. Turn around.”

“﻿The SES have preemptively deployed personnel to various parts of the state within the potentially impacted area,” Simms told 9News.

“SES volunteers are on high alert.

“(But) with tornadoes and destructive storms it is hard to predict and the lead time is minimal.

“As with all severe storms, the best idea is to stay indoors, away from windows, unplug electrical devices and stay away from fallen trees and power lines and clean up around the yard.

“Make sure there is no loose material.”

Simms said an excess of 50mm of rain could fall around saturated catchments in Sydney, the Central West, the Illawarra and South Coast﻿ in the coming days.

Much of the flood risk is in the state’s central and north-west with the SES issuing 14 “watch and act” notices across the region.

Bourke ﻿is one of the areas on alert, with SES writing: “The Darling River at Bourke is likely to reach the moderate flood level (11.40 metres) around 12-14 October.

“﻿The river level may reach around 12.00 metres during late October, with further rises possible.”

The outback town had its wettest October day in 67 years recording 45.4mm.

Weatherzone said an end to the wild conditions is in sight.

“The silver-lining to this wet week is a broad high pressure system moving in from the weekend, allowing skies to clear and days to warm up early next week,” it wrote. ﻿

A trough will pass over Queensland from Saturday, which is expected to bring about 40-60mm of rain to some sections of the south east.

Half a dozen flood warnings have been issued for the Sunshine State.﻿

“What has got forecasters really concerned this morning is what’s being called a ‘cool pool’, this weird weather phenomenon,” Davies explained.

“There is a section of the ocean just off south-east Queensland here on the Gold Coast that is much cooler, below average temperatures in the ocean.

“This pool is actually expanding in size and that is what forecasters are keeping a very close eye on.

“What their concern here is that the cooler, below-average temperature water mixes with the warmer waters, particularly as it starts to warm up closer to summer, and that could lead to convection and of course a greater chance of flooding events.”

Victoria is also bracing for showers and potential thunderstorms today.