Penn study: Changing fuel for cement kilns could cut CO2 emissions. But cost is an obstacle 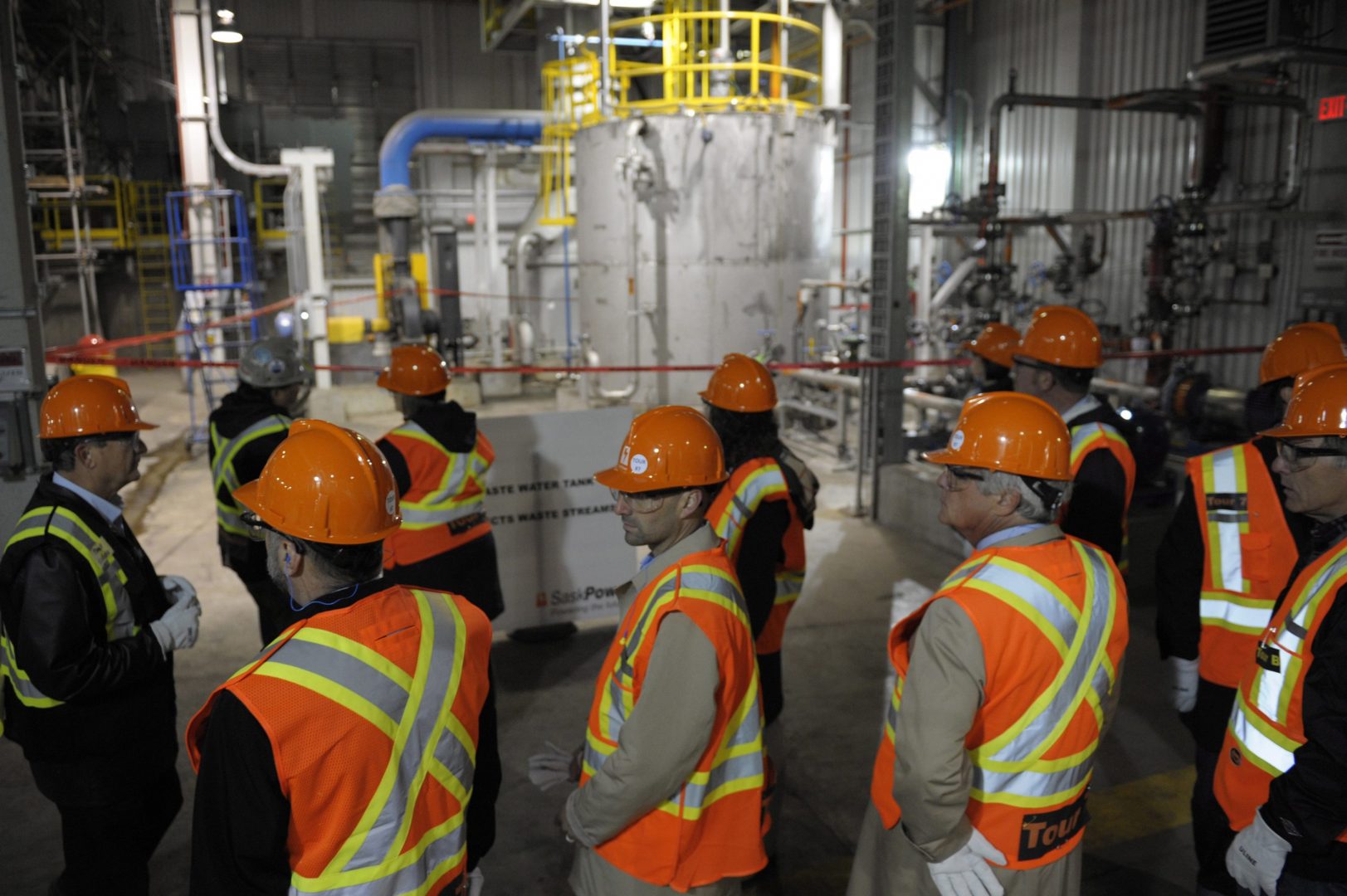 Visitors tour a carbon capture and storage facility during its official opening at the Boundary Dam Power Station in Estevan, Saskatchewan in 2014. SaskPower said the $1.4-billion facility is to take carbon dioxide released by the Boundary Dam power plant near Estevan and release the gas deep underground using a steel pipeline for storage.

Correction: The cost comparison of some carbon capture techniques was incorrect in the original version of this story.

Economic hurdles are one obstacle to oxygen-fired and electric cement furnaces becoming reality at cement plants that emit high amounts of CO2, researchers at the University of Pennsylvania say.

Climate scientists say if there’s any chance of reaching President Biden’s goal of net-zero emissions by 2050, significant emissions cuts are needed, and some method of carbon capture must play a role. The Penn researchers say heavy industry could adopt strategies to cut emissions and capture carbon.

Their study proposes changes to the cement, steel, glass, lime and coke industries. Of those, cement production generates the most CO2 pollution.

Maxwell Pisciotta, a Ph.D. candidate in the Clean Energy Conversions Laboratory at Penn and co-author of the study, says if cement factories either switched from coal-fired kilns to oxygen-fired ones, or adopted traditional carbon-capture technology, they could cut emissions by two million metric tons per year.

But, he says, that kind of industry-wide change is unlikely.

“If you look at finance, budgeting, policy, and other economic drivers, I think there are a lot of other things that stand in the way of deploying it. Specifically, there’s no incentive right now to decarbonize cement.”

Cement plants already take some steps to limit emissions. Some plants have used tire scraps, old carpet from cars, or pistachio shells instead of coal and natural gas to fuel their kilns. Carbon capture and storage facilities, like those in West Texas and Wyoming, are becoming more mainstream. And still, in 2019, cement manufacturing alone emitted 2.3 billion metric tons of carbon dioxide gas globally.

Cement is what turns watery sand and rocks into concrete. Cement and concrete product manufacturing in Pennsylvania generates upward of two billion dollars in revenue every year. That translates to roughly three million metric tons of emitted CO2 every year solely from cement production in the commonwealth.

With every pound of concrete produced with regular cement, 0.93 pounds of carbon dioxide are released into the atmosphere – practically a 1:1 ratio.

The process of making cement is the reason that it emits so much carbon dioxide.

Firing kilns to extremely high temperatures (1000°F to 2700°F) calls for lots of fossil fuel consumption and results in lots of carbon dioxide emissions. Limestone also goes through a chemical reaction at this temperature, releasing even more CO2.

Pisciotta says that instead of replacing older kilns with conventional rotary kilns that burn fossil fuels, the companies could rework their kilns into oxygen-fired furnaces.

In an oxyfuel process, ordinary air (a combination of nitrogen and oxygen) is replaced with pure oxygen inside a rotary kiln. This leads to an even larger increase in the resulting product’s temperature and more energy production.

The gas released from the oxyfuel process can then be collected by a condensing unit and recycled into the initial feed for the kiln.

Some parts of that carbon capture process are less expensive than more popular techniques, although the report didn’t conclude the overall process was less costly.

Because the emitted CO2 is being repurposed after its production, it’s not being released into the atmosphere. Cement plants that capture their emissions at the source could cut Pennsylvania emissions by 2 million metric tons of CO2 every year.

What does the cement industry have to say?

Ben Miller, the Safety, Health, Environment, & Quality Assurance Manager at Lehigh Hanson Cement Company in York, Pa., says that he isn’t aware of any oxyfuel kiln implementation at his plant. When asked about possibly replacing kilns with oxyfuel technology, Miller said that his main rotary kiln, installed in 1962, was repaired earlier this year and hopefully wouldn’t need an update any time soon.

Pisciotta says that advancements of this magnitude would have to be met with policy changes and economic incentives.

“Similar to the Buy Clean California Act, which is targeting low carbon or low global warming potential steel and wool materials, we should expand that to cover things like cement and concrete.” And it’s crucial for that policy to be applied uniformly across the states, Pisciotta said.

“In the event that it didn’t, everyone could then, instead of buying within [their own state], could just go buy from another state, where maybe they’re still emitting 100% CO2.”

While Pennsylvania’s involvement in the Regional Greenhouse Gas Initiative, which works to decarbonize power plants, could be a step in the right direction, Pisciotta believes that expansion to cover cement and other industrial plants, as well, could help incentivize the decarbonization of the entire industry.


Wise (formerly TransferWise) is the cheaper, easier way to send money abroad. It helps people move money quickly and easily between bank accounts in different countries. Convert 60+ currencies with ridiculously low fees - on average 7x cheaper than a bank. No hidden fees, no markup on the exchange rate, ever.