But Mau Forest is shrinking as its trees fall to human pressures. Even Mau’s protected areas are not immune. One of these is Olpusimoru Forest Reserve, which has been facing high rates of deforestation as people cut down trees for timber and fuelwood collection.

Over the past 20 years, this forest has faced destruction from illegal loggers and encroachers who have extended their farming and grazing lands deep into the forest. By 2010, approximately 30 square kilometers (11.6 square miles) of Olpusimoru’s forest had already been impacted by logging, agriculture and illegal settlements, according to the Kenya Forest Service (KFS). Satellite data from the University of Maryland visualized on Global Forest Watch indicate the reserve lost a further 9% of its primary forest between 2011 and 2021, with preliminary data for 2022 showing deforestation continuing to eat away at remaining habitat. 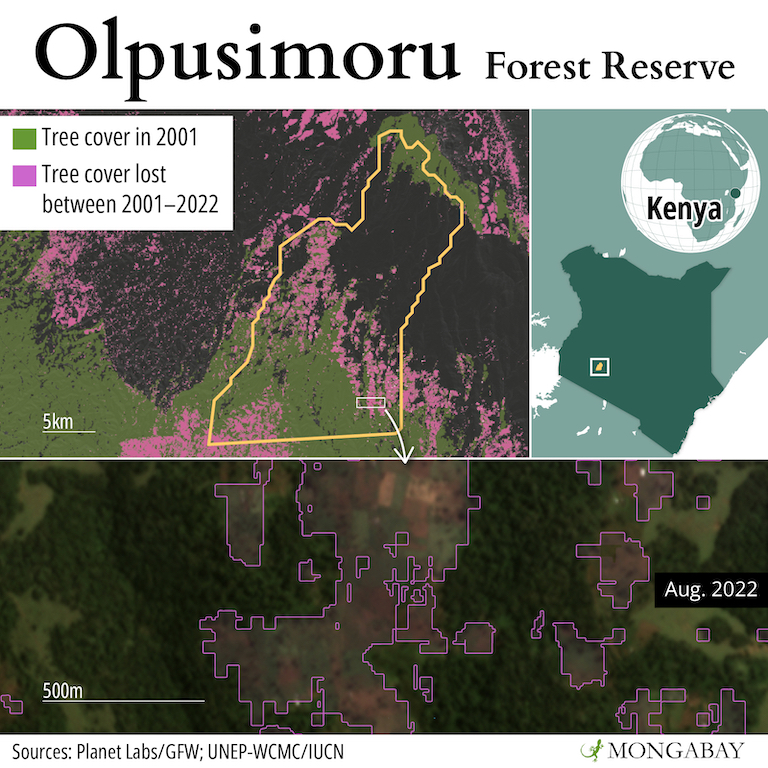 Beginning in 2018, thousands of families that had established themselves inside the forest reserve’s boundaries were evicted by the Ministry of Environment and Forestry, part of a wider push that saw more than 30,000 people evicted from the broader Mau Forest Complex to which Olpusimoru belongs. But when walking around the forest today, fresh signs of continued encroachment and damage to the forest are evident. Recent, widespread deforestation can also be seen in satellite data and imagery on Global Forest Watch.

“Some people are cutting trees to survive. No one cares about how it’s affecting the community. Trees like pencil cedar (Juniperus procera) are disappearing,” said Daniel Koros, who lives in Olpusimoru Forest Reserve.

Koros, 71, is a father of nine and has lived in the area for 44 years. He was among the first people to settle in Olpusimoru before it was gazetted as a reserve in the 1950s.

Koros said he has witnessed how land-use changes coupled with massive deforestation have affected the livelihoods of local communities. According to Koros, encroachment by an expanding population has become a major driver of deforestation in the area as the forest is converted for human use.

In the past two years, efforts by KFS have been geared toward reforesting portions of the reserve that had been previously cleared. Officials say that planted trees are growing quickly in areas from which people were evicted in 2018.

But despite government intervention, signs of fresh logging, charcoal burning and overgrazing are evident in Olpusimoru. Piles of raw logs and remains of trees cut down are what welcome one deep inside the forest. According to Koros, loggers target commercially valuable species such as African olive (Olea africana), African pencil cedar (Juniperus procera), African cherry (Prunus africana) and podo (Podocarpus falcatus).

The destruction of Olpusimoru and other areas of the Mau Forest has affected thousands of people who mostly depend on it for water. Koros, who has been a farmer for much of his life, said rainfall was no longer predictable due to the shrinking forest cover fueled by deforestation. Rivers that once flowed year-round have become seasonal with some completely drying up, he added.

“This area used to be very fertile, we had rain every season; but these days, rain only comes in specific months and only for a short time,” Koros said. “It is so unpredictable, thus affecting farmers.”

His sentiments were echoed by KFS’ Opiyo, who said logging was affecting both forests and farmers.

“[The] effect of forest logging is a reduction in forest cover and soil erosion in neighboring farmlands,” Opiyo said, explaining that trees help stabilize soil. He added that climate change and overgrazing also contribute to erosion in the region.

Due to this, farmers like Koros said they were feeling the pinch of lower yields caused by decreased soil productivity. Opiyo said that in response, KFS, along with nongovernmental organizations such as the Community Forest Association, has been working to rehabilitate degraded areas.

To deter encroachment into Olpusimoru Forest Reserve, KFS set up a camp along the reserve’s border where forest rangers monitor the forest for illegal activity.

“We have forest rangers in charge of forest protection assisted by community members through [the] Community Forest Association. They protect the forest from illegal activities,” Opiyo said.

He added that rangers also work with locals to plant tree seedlings in degraded portions of the reserve. According to Opiyo, residents are allowed to access the forest, but activities are limited to cultural events, fetching water, ecotourism, research and education purposes.

Opiyo said that despite efforts to protect Olpusimoru, loggers were still encroaching into the reserve, often under the cover of night.

Wilfred Sanlam, a Community Forest Association official and conservationist, said he understood the impacts of deforestation well. He works with other area residents in a group dubbed Bamboo Junction (so named due to the group’s initial work with bamboo). The group now focuses on preparing seedling nurseries and planting native trees like African pencil cedar that have become rare in Olpusimoru Forest Reserve, as well as fruit trees for the local economy.

“Poverty in this area is driving deforestation, but we are trying to educate the community on the dangers of cutting trees, ” Sanlam said. “This tree nursery is one of the projects that will help us reverse the damage.”

Bamboo Junction has 30 members and has been planting native trees as well as fruit trees to safeguard the forest reserve. The group is one of only a few in the area working to protect the ecosystem. According to Sanlam, most locals don’t understand why trees are important ecologically, and so one of the group’s aims is to increase environmental awareness by urging area residents to join hands and take part in reforestation.

However, Sanlam cautioned that the efforts of his team were often hampered by inter-community conflicts rampant in the area.

Clashes between the Maasai and Kipsigis ethnic groups have occurred regularly between different communities over land boundaries since 2009. The situation has become so heated that people have been killed. The latest row, according to residents interviewed by Mongabay, was in March and destroyed both property and forest.

According to conflict mapping by by Promara conducted in 2011, clashes in the area were not relegated to Olpusimoru Forest Reserve and occurred throughout the Mau Forest Complex. Promara found these conflicts were fueled by competition for land between communities belonging to different ethnic groups, and have been exacerbated by land-use change, population pressure, livestock theft, deforestation and land injustices dating back to Kenya’s colonial days, as well as access to resources like water and pasture.

Sanlam said that in Olpusimoru, conflicts are reversing efforts to heal the ecosystem, and the forest is suffering collateral damage as communities fight over dwindling resources.

Collins Keter, a local leader of the nearby community of Olenguruone, said hundreds of acres in Olpusimoru Forest Reserve have been destroyed. With deforestation linked to water insecurity, Keter said he worried that continued deforestation in Olpusimoru and other parts of Mau Forest may have dire impacts within the forest and beyond.

“Mau forest is an important ecosystem, and continued degradation will affect millions of people who depend on it for water,” Keter said. “Our rich biodiversity is also at stake if this shrinking continues.”

Banner image: A side-striped jackal (Lupulella adusta), one of the many species that inhabits the Mau Forest. Image by Bernard Dupont via Wikimedia Commons (CC BY-SA 2.0).

Feedback: Use this form to send a message to the editor of this post. If you want to post a public comment, you can do that at the bottom of the page.