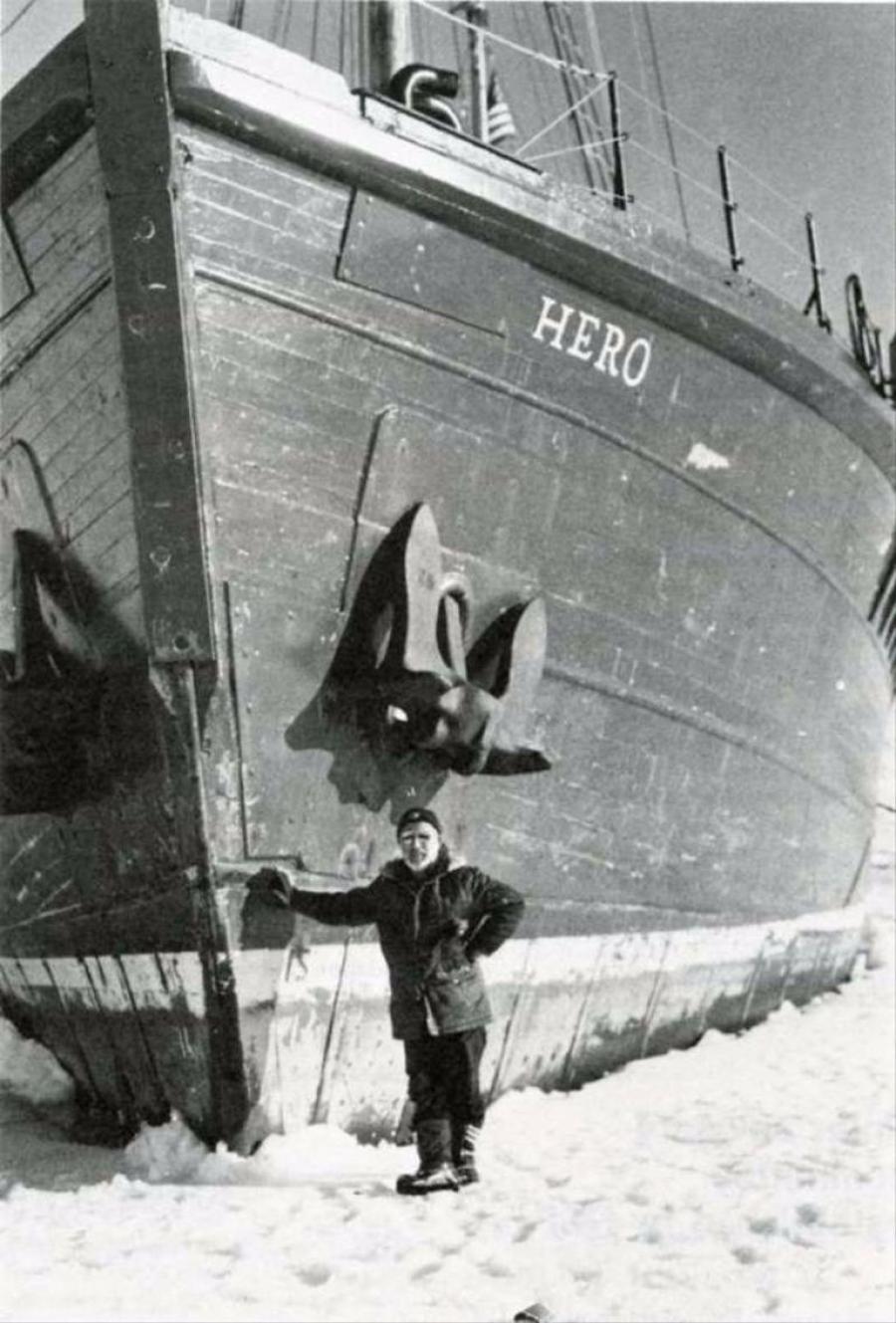 A project to demolish the research vessel Hero in Bay Center, Wash., is well under way, with the contractor predicting the job will be finished by mid-September. The legendary wooden boat operated in the Antarctic for 16 years until she was decommissioned in 1984.

Following that, the RV Hero suffered from neglect before decaying and sinking in Washington’s Palix River estuary in the winter of 2017.

Crews from Washougal, Wash.’s Ballard Marine Construction have been working on the wreckage for about a month, according to the Chinook Observer in Long Beach, removing hazardous chemicals to pick it apart piece by piece. A massive crane and excavators on a barge have done most of the work.

“They’re currently focusing on getting harmful pollutants out from inside the ship, primarily lead and asbestos, but have begun some demolition,” Joe Smillie, spokesperson of the Washington Department of Natural Resources (DNR), told the newspaper. “Overall, they’re about a third of the way through the project. They will be ramping up demolition efforts in [the] coming weeks.”

After a public bid, the demolition was awarded to Ballard Marine for $1.8 million, not including hazardous material removal or disposal. The total project is expected to be more than $2.5 million due to the asbestos contaminated material, and lead and toxic PCBs on the vessel, DNR noted.

Funds came in a special one-time appropriation by the Washington State Legislature.

The project has grabbed the attention of travelers along Bay Center Dike Road, who often slow down or stop on the road completely to watch the heavy equipment in action. Many snap photos as the excavator reaches down, crunches a piece of the legendary boat, and pulls it aboard the barge.

The Observer reported that Bay Center Dike Road will be closed for three-hour intervals on Aug. 18, and again on Aug. 25, to allow Ballard Marine to remove the wreck of the RV Hero from the site of its sinking. That is mainly because the project involves rapid aerial work over the street, something that is safest to do without traffic nearby, DNR said.

RV Hero Pieces to Be Sent to Its Birthplace

While the old boat became a major eyesore for the residents of Bay Center and a significant concern of local fishermen and oyster farmers concerned about pollution coming from the RV Hero, not everyone is happy to see the vessel demolished.

Before its demise, the vessel was world-renowned for its research around the globe, including multiple forays to Antarctica.

Maritime experts in the state of Maine are proud of the 125-ft. vessel that was built in 1968 and launched by Harvey Gamage at his shipyard in South Bristol.

Parts of the boat and its historical legacy are expected to be handed over to The Antarctican Society to allow its past glories to live on. Arrangements have already been made to transport salvaged parts of the boat back to Maine, more than 3,000 mi. away.

“[DNR] has been in contact with The Antarctican Society about the salvage efforts of the RV Hero,” explained Charles H Lagerbom, the organization’s archivist. “We have been assured we will receive photos and images of the removal process.”

He added that a trucking company stands ready to bring back up to five tons of the boat’s remains. Another local maritime museum in Maine, Lagerbom said, also expressed interest in exhibiting salvaged and preserved items from the RV Hero.

The Observer reported that among the pieces The Antarctican Society will receive is the vessel’s weather frame, a long-ago conqueror of fierce storms and heavy seas.

“The Antarctican Society would like to thank [Washington] Commissioner of Public Lands Hilary Franz and [the state’s] Derelict Vessel Removal Program Manager Troy Wood for all their help and assistance in this endeavor,” Lagerbom said. “This is a pretty big deal and could not have been successful without their help.

“They have played a huge role in helping return to the Pine Tree State the remains of an important piece of Maine maritime history. Hero’s final chapters are still being written, and we are glad to be a part of it,” he added.