What Is Ocean Acidification? | Earth.Org


Ocean acidification is threatening marine ecosystems and it is the main cause of mass coral bleaching events. It is estimated that by 2100, this phenomenon could cost the global economy US$3 trillion a year, with huge repercussions on the fishing and tourism industries. Due to its devastating impacts on the planet, this is undoubtedly a paramount environmental issue that is worth addressing. What is it and what are the effects of ocean acidification on marine life, ecosystems, and human life?

What is Ocean Acidification?

Depending on seasonal and regional factors, the pH value of ocean water will fluctuate naturally. For example, pH is generally lower in cold water as carbon dioxide dissolves well in colder temperatures. The polar regions are therefore found to be particularly prone to ocean acidification. For the same reason, the seawater in winter is usually more acidic. The pH value can also be lower in volcanic areas, where large amounts of carbon dioxide escape from natural volcanic sources.

All things considered, it is easy to see the connection between global warming and ocean acidification: both are primarily caused by an increase in carbon dioxide levels. The oceans have absorbed between a third and a half of the carbon dioxide humans have released into the atmosphere since 1850. It is exactly for this reason that oceans, along with forests, are considered the world’s biggest carbon sinks. By absorbing emissions, they help alleviate the consequences of global warming. Yet, the ever-rising carbon dioxide emissions are overloading the capacity of these carbon sinks, leading to the worsening of ocean acidification. This means that there is no climate change without more acidic oceans. In other words, unless we reverse global warming, our oceans will keep getting more acidic.

How Acidic Is the Ocean? Some Statistics

The pH value of global seawater – which naturally contains alkaline ions that come from the weathering process of continental rocks – has remained stable at an average of 8.2 for millions of years. However, since industrialisation began around the 1760s, the value has decreased to about 8.1.

While this change might seem insignificant, it is important to keep in mind that the pH scale is logarithmic and thus a small change in pH can cause an exponential change in acidity. In fact, a change of 1pH unit represents a tenfold change in acidity. This slight decrease in average water acidity is also found to represent a 26% increase in acidity over about 250 years, a rate that is 100 times faster than marine species have experienced in tens of millions of years. Worse still, the acidification is not expected to come to a halt, with the pH of ocean water estimated to further drop by 0.3 to 0.4 units by 2100, equivalent to a 150% increase in acidity over preindustrial times. 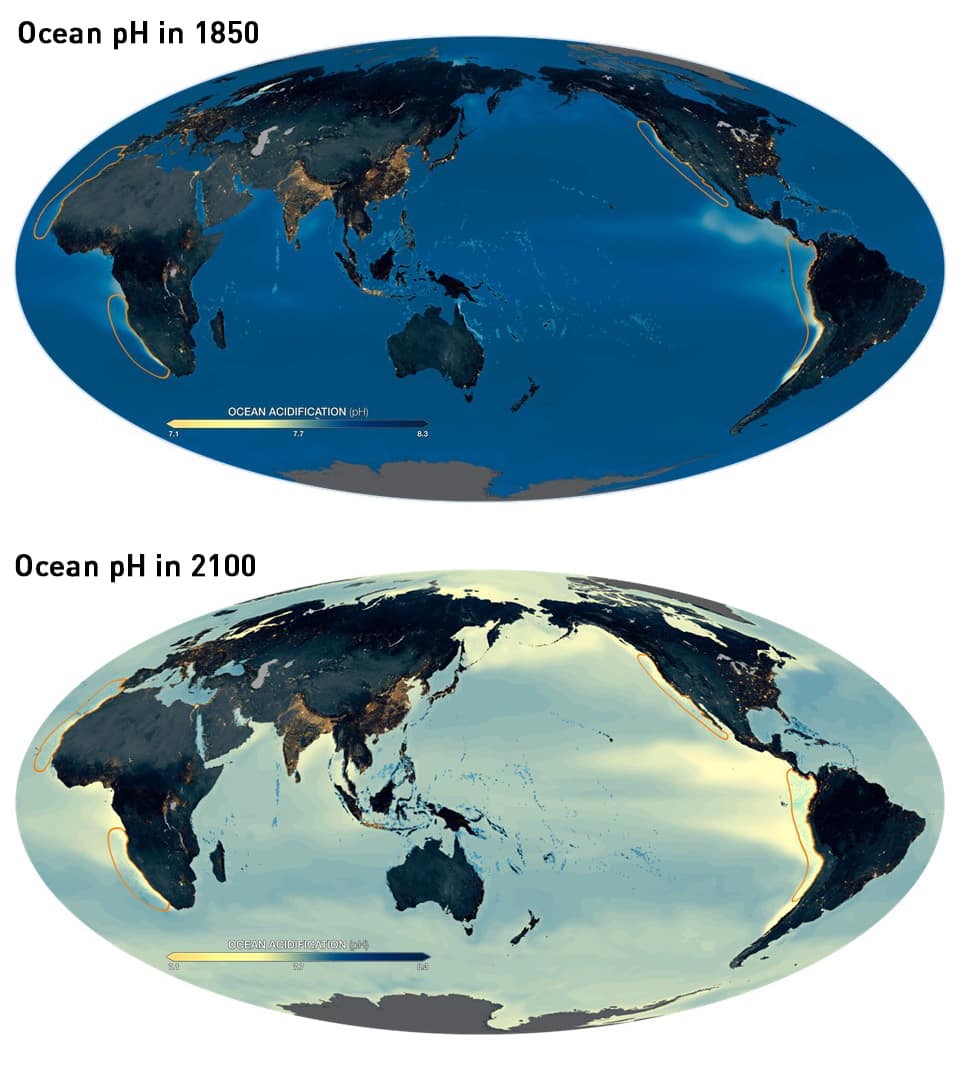 A study published in 2014 by Columbia University’s Lamont-Doherty Earth Observatory has provided a comprehensive set of statistics on global marine acidity. In this study, 2005 is used as a reference year to draw on four decades of measurements.

Scientists found that the acidity of the Bering Sea – located in the Northern Pacific Ocean and dividing Alaska and Siberia – has reached a pH value of 7.7, making it the world’s most acidic sea. The sea is even more acidic than that in the Antarctic, which is said to be more vulnerable to acidification because of the cold climate. The difference in acidity can be attributed to the fact that the Bering Sea is partially enclosed by land. While acidic water can easily flow out of the Antarctic region, the water in the Bering sea remains trapped.

While the pH value of the equatorial Pacific is subject to high variability because of El Niño and La Niña events, the tropical and temperate oceans were recorded to have the least variation, with pH ranging between 8.05 and 8.15 as temperatures fluctuate in winter and summer. Temperate oceans were also found to be less acidic compared to the other regions.

What Are The Effects of Ocean Acidification And Should We Be Concerned?

The acidification of the ocean is dangerous, if not catastrophic, to the marine ecosystem. Because acidic water removes carbonate ions – a crucial building block for shells and skeletons – lots of marine organisms are particularly at risk in a more acidic ocean.

Coral reefs – large underwater structures composed of the skeletons of colonial marine invertebrates called coral – contain one of themost biodiverse ecosystems on earth and are thus incredibly valuable to our planet. They are sources of nitrogen and other nutrients for marine food chains, and also offer protection to coastlines from the damaging effects of wave action and tropical storms. It is therefore imperative to preserve them.

Unfortunately, mass coral bleaching events, typically associated with ocean acidification, are occurring at an unprecedented rate. Indeed, more acidic water reduces the water’s carrying capacity for calcium carbonate, which is crucial for coral reefs to rebuild their exoskeletons. Today, coral reefs are experiencing more acidity than they have at any time in the last 400,000 years. This is threatening the survival of coral reefs all over the world, from Australia to Hawaii.

Ocean acidification also brings socio-economic impacts to societies. The tourism industry is expected to bear the brunt of this crisis. Countries that rely on marine ecosystems such as coral reefs to attract tourists, are particularly affected. One example is the Great Barrier Reef Marine Park in Australia, which every year generates approximately A$5.4 billion (US$3.7 billion) in revenue.

Food security is another negative effect of ocean acidification. Commercially viable marine species – such as oysters and mussels – are heavily impacted by this pehnomenon. It is estimated that the global annual costs of molluscs loss from ocean acidification could be over US$100 billion by 2100. New Bedford – a city in US that relies completely on scallops to sustain its economy, may experience huge financial losses due to ocean acidification.

Finally, the destruction of coral reefs adds more financial burden on coastal protection. Indeed, without protection from the coral reefs, shorelines are much more vulnerable to destruction from storms and cyclones. The loss of coral reefs will cause coastal erosion and result in damage of properties, with experts estimating costs of up to US$9 billion per year.

What Can Be Done to Tackle Ocean Acidification?

The US National Science and Technology Council was asked to review federal efforts to address ocean acidification. In December 2016, it issued a document titled “Implementation of the Strategic Plan for Federal Research and Monitoring of Ocean Acidification”, a comprehensive guide on the scientific understanding of the effects of ocean acidification, the extent to which federal agencies have implemented plans and policies to tackle this issue, as well suggestions on additional actions that could be taken to advance the federal response to ocean acidification.

Moreover, the National Oceanic and Atmospheric Administration (NOAA) – a scientific and regulatory agency in the US – co-leads a pioneering network known as the “Global Ocean Acidification Observing Network”, engaging 66 nations in monitoring the progression of acidification, identifying areas of highest risk.

Other countries have also implemented measures and formed competent bodies in charge of monitoring and tackling ocean acidification.

The Integrated Marine Observing System (IMOS) in Australia operates a network of coastal and ocean observing systems to track many features in the ocean. Data is provided back to scientists to interrogate changes in ocean carbon, contributing to national and international studies.

Besides setting up networks and monitoring systems, countries must step up their efforts in reaching their climate pledges. As the latest IPCC report highlighted, we are still far from limiting global temperature rise below 2C and it is probably too late to keep it under 1.5C, a target that was set in 2015 in the Paris Agreement.

The report suggested that we must peak global greenhouse gas emissions before 2025 at the latest, and cut emissions by 43% by 2030. Reaching this target will help tremendously in alleviating not only ocean acidification but also many other environmental issues including global warming and air pollution.

We as individuals can also play a role by lowering our own environmental footprint. Buy locally grown products, recycle our waste and reduce our consumption of plastics, opt for renewable energy to power our homes and avoiding the use of cars that run on fossil fuels

whenever possible are just some of the ways to cut down carbon footprint. By taking incremental steps, we can help preserve the health of our oceans.